Casablanca - Over 200 artists and producers participated in the creation of a musical drama on the life of Prophet Mohammad (PBUH) and performers took to the stage to present their work of art last week in Charjah, United Arab Emirates. 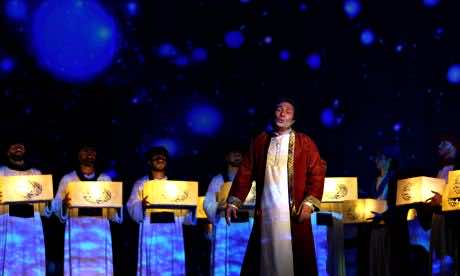 By
youssef sourgo
-
Youssef Sourgo is currently a Master’s student in Linguistic and Literary studies at Ain Chok Faculty of Letters and Humanities.
Apr 2, 2014
Spread the love

Casablanca – Over 200 artists and producers participated in the creation of a musical drama on the life of Prophet Mohammad (PBUH) and performers took to the stage to present their work of art last week in Charjah, United Arab Emirates.

For six months, theater experts and dozens of artists worked on an opera based on the life of Prophet Mohammad (PBUH), which showcased on Sunday at a Roman-style amphitheater in Charjah. The opera, entitled “Clusters of Light,” is the first of its kind.

To avoid including any human portrayal of the Prophet in the opera, which is forbidden in Islam, the theater experts represented the Prophet as a source of radiant light in the only scene in which he appears.

“The 90-minute production has the ambitious stated intent of rebranding the religion internationally,” writes The Guardian.

The cast of “Clusters of Light” consists of 200 artists, including one of the Arab world’s most celebrated singers and recent winner of Arab Idol, Palestinian Mohammed Assaf.

“Clusters of Light” director, Gavin Robins, described it as “the most technically advanced show” he has worked on and “one of the most dramatic,” according to the same source.

“You could describe it as a romantic thriller,” The Guardian wrote, quoting the director. “When we first rehearsed the scene about the Prophet’s death, the entire company was genuinely weeping. It’s a gift to be able to take that energy from a cast,” he added.

According to the same source, technical director, Piers Shepperd, said his involvement in “Clusters of Light” changed his views about Islam’s take on several matters, especially the role of women.

“If you look at the popular misconceptions about Islam, that isn’t the case at all. It’s great to be working on a show that explores those kinds of things,” Shepperd said.