Casablanca - King Mohammed VI chaired this Wednesday in Casablanca the launching of the 2014-2020 national industrial growth plan, a leading program following suit to the "Emergence Strategy." 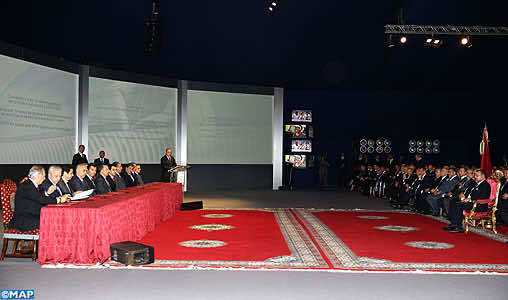 Casablanca – King Mohammed VI chaired this Wednesday in Casablanca the launching of the 2014-2020 national industrial growth plan, a leading program following suit to the “Emergence Strategy.”

Industry, trade, investment and numeric economy minister, Moulay Hafid Elalamy, made before the King a presentation on the new plan which represents “an evolution of Emergence towards performing ecosystems in order to consolidate gains and expanding results.”

Building on “our achievements and assets, such as aeronautic, car-making and off-shoring, this strategic plan, said El Alamy, is inclusive and reintegrates “our traditional job-creating industries.”

The minister noted that the plan will be based on ten key measures, namely the creation of a new dynamic and a new relationship between large groups -steering enterprises- and SME’s, reinforcement of the status of industry as a job-generating activity, particularly for young people, and optimization of the social and economic impact of public procurement through industrial clearing.

According to El Alamy, the new plan will endeavor to support transition from the informal to the formal sector through the establishment of a complete mechanism for the integration of very small enterprises, meet the essential stake of matching skills with enterprise needs, setting up a public industrial investment fund, with a budget of MAD 20 billion by 2020, and the creation of more accessible for-rent industrial parks.

The plan also features follow-up of free trade agreements, currently being negotiated, permanent monitoring of the respect of the existing FTA’s, the establishment of a “Deal Making” culture in seeking foreign direct investments and increasing Morocco’s African calling.

Implementation of this set of measures will allow for the creation, by 2020, of half a million jobs, half of which will be generated by foreign direct investments, as well increasing the industry’s share of the GDP by 9 points, from 14pc to 23 pc in 2020.

Concerning governance, El Alamy announced the future creation of an inter-ministerial committee in charge of coordinating and implementing the industrial growth plan    which is set to turn Morocco into “an industrial and social champion”, noting that Morocco boasts “collective energy and human and material means to achieve this necessary transformation.”

Following this, the King chaired the signing ceremony of 14 documents, including 33 conventions related to the 2014-2020 industrial growth plan.

The ceremony took place in the presence of the head of the government, advisors to the King, government members, representatives of the diplomatic corps accredited in Rabat and several industrial professionals and operators.