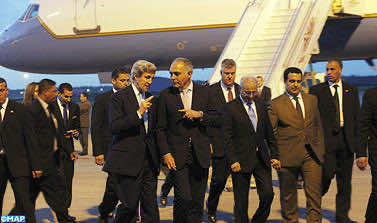 Rabat  –  US secretary of state John Kerry arrived, on Thursday in Rabat, for a visit to Morocco during which he will co-chair with Moroccan foreign minister Salaheddine Mezouar the 2nd Morocco-United States Strategic Dialogue.

This session, themed “strengthening solid cooperation ties between the two countries”, is an occasion for both parties to promote their partnership in the political, economic, social, educational and cultural fields, said a statement by the foreign affairs ministry.

The meeting will open new horizons in bilateral ties, in keeping with recommendations outlined in the joint communiqué adopted following the summit talks held in November 2013 in Washington between HM King Mohammed VI and US president Barack Obama.

After the strategic dialog first session held in September 2012, the second session comes to illustrate the excellent friendship and longstanding relations binding the two countries that share the same values and same interests.

The session will also be an opportunity to deepen political consultation on bilateral, regional and international issues.

Announcing last week the visit by Kerry to the Kingdom, the US state department underlined that “this dialogue, launched in September 2012, underscores our ongoing close cooperation with Morocco and will focus on political affairs, economic and security cooperation, and educational and cultural issues.”