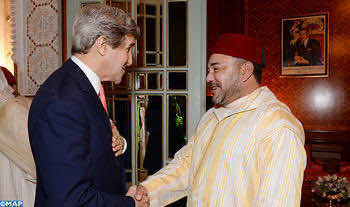 Casablanca – King Mohammed VI received on Friday at the Royal palace of Casablanca visiting US secretary of state, John Kerry, says a release of the Royal office.

Kerry is currently on an official visit to Morocco, mainly to co-chair the 2nd session of the “US-Morocco strategic dialog” which is an important component of the exceptional strategic partnership binding the two countries, the release adds.

Kerry’s visit also follows suit to the Royal visit to Washington and to the intensive and diversified actions agreed upon during this trip between HM the King and President Obama.

During the audience, HM the King reiterated his deep attachment to the strategic partnership, fruit of a longstanding and multidimensional alliance with the USA. This partnership is based on confidence, solidarity, sharing values, interdependence and the defense of shared interests. It has adapted, evolved and been renewed to meet the two countries’ expectations and the mutations of the regional and international context.

The Royal visit to Washington, on November 22, 2013, opened new perspectives for the prosperity of this strategic partnership, by considerably enriching its agenda and setting a more ambitious course.

The joint release, adopted during this visit, has helped further intensify consultation on strategic issues, define new cooperation tracks, adapt the existing special instruments and develop other diversified mechanisms, while at the same time, consolidating gains and foundations of a historic alliance between Morocco and the USA.

The Sovereign recalled that the present regional and international context is confirming the pertinence and the depth of this partnership, which, henceforth, needs to expand and contribute mainly to lasting security and stability, shared economic prosperity and human development in the African continent.

On his part, the US secretary of state reiterated President Obama’s attachment to deepening the singular strategic partnership with Morocco.

Kerry also reiterated the US will to endeavor with Morocco for the consolidation of peace and stability regionally and internationally.

Kerry further praised HM The King’s constructive role and active contribution, in his capacity as chairman of Al Quds Committee, in efforts to reach a fair, final and comprehensive settlement to the Israeli-Palestinian conflict, on the basis of the formula of two states living side by side in peace and security, in accordance with the United Nations resolutions.

The King, chairman of Al Quds Committee, handed to the US Secretary of state a register of all Israeli abuses in the holy city of Al Quds Asharif, seeking to alter its religious calling and its authentic architecture.

The meeting took place in the presence of Dwight L. Bush, US ambassador in Morocco, Prem Kumar, director for the Middle East, North Africa and national security, Jonhathan Finer, deputy-chief of state, Fouad Ali El Himma, advisor of HM the King and Salaheddine Mezouar, minister of foreign affairs and cooperation.