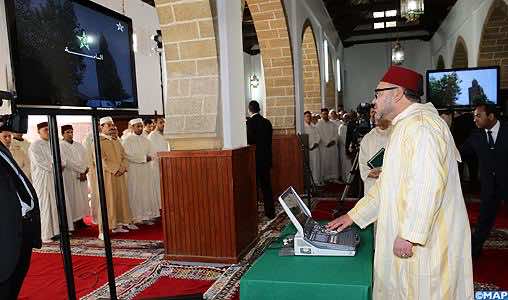 On this occasion, habous and Islamic affairs minister, Ahmed Toufiq, presented to the Sovereign the broad lines, objectives and pedagogical means of the 200-2014 literacy program in mosques.

The minister pointed out that the literacy program through the TV and Internet, developed by the ministry of Habous and Islamic affairs in accordance with Royal instructions, “reflects the care of HM the King for human development and his constant will to expand and diversify learning means adopted by the mosques literacy program.”

Broadcast on daily basis on the Mohammed VI Koran radio station “Assadissa” and on the Habous and Islamic affairs website (www.habous.gov.ma), the program comprises 90 episodes (of 30 mn each). The program will broadcast 1st level courses in reading and writing, Holy Coran and Arithmetics. 2nd level programs will be broadcast in the 2014-2015 school year.

Around 6,000 teachers will be assigned to give tutoring and support classes in mosques and 440 pedagogic coordinators and advisors will be in charge of the program’s pedagogical supervision.

The minister added that the mosques literacy program has yielded, thanks to the Royal care, very satisfying results that exceeded the initial goals, noting that between 2000 and 2014, over 1.8 million persons, including 1.48 million women, benefitted from the program.

The Sovereign, then, handed awards and certificates to a group of the program graduates for the 2012-2013 school year.