Taroudant, Morocco - A huge groupie of fans mobbed the Moroccan Saad Lamjarred on Wednesday April 2 at Al Hamra Mall in Kuwait during his participation at the opening of a store for perfumes of a famous brand. 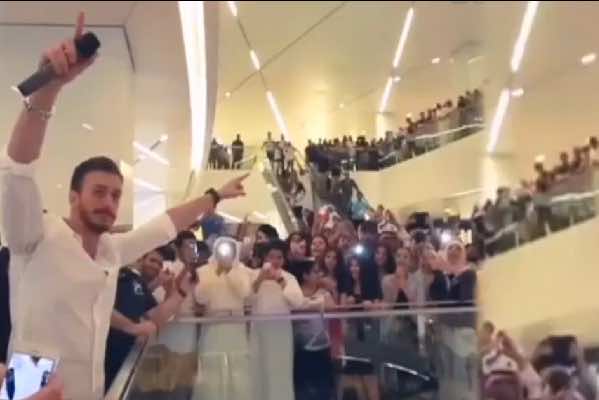 By
Larbi Arbaoui
-
Larbi is a freelance writer and assistant editor at Morocco World News.
Apr 5, 2014
Spread the love

Taroudant, Morocco – A huge groupie of fans mobbed the Moroccan Saad Lamjarred on Wednesday April 2 at Al Hamra Mall in Kuwait during his participation at the opening of a store for perfumes of a famous brand.

In a footage posted on YouTube, girls wearing the headscarf were screaming, hysterically shouting his name and climbing on their friends’ shoulders to get a full glimpse of the Moroccan singer.

Lamjarred was then forced to flee the scene with the help of Kuwaiti police who came to his rescue.

The unorganized fans in Kuwait Mall have been criticized on social media for their “rowdy” behavior.

The footage showing Kuwaiti girls fighting one another and shoving security guards to get closer to the Moroccan singer and take photos with him sparked outrage among Kuwaitis.

Driven by jealousy, the melee broke out because a girl was able to reach Lamjerred and shake his hand.

While some Kuwaiti media blamed the poor organization in the mall and the disorder of young people jostling each other an the arrival of Saad Lamjarred, the presenter of Alshahed TV Channel, Mohammed Al Mulla, preferred to hold the singer personally responsible for what happened, attacking him and his country, Morocco.

In a conservative society like Kuwait, girls with the veil are supposed to show some modesty and keep some distance from boys, but once the Moroccan singer started to sing his famous song “Nti” in Moroccan dialect, the girls were singing along with and kept pushing one another.

“A lot of the girls hit back and say that the guys didn’t behave any better when Kim Kardashian was in town, and actually, they were just jealous of the fact that Saad Lamjarred was getting all the girls attention,” Sumaya Bakhsh said on BBC.