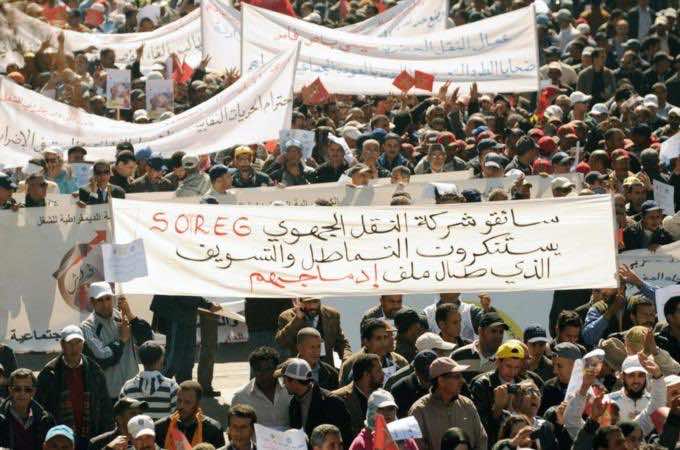 Casablanca- A national demonstration initiated by three trade unions, namely the Moroccan Labor Union (UMT), the Democratic Confederation for Labor (CDT) and the Democratic Federation for Labor (FDT), was staged on Sunday in Casablanca to protest against the deterioration of the social and economic conditions of the working class and wage-earners, according to Maghreb Arab Press.

The demo, held under the theme “a national march to defend the buying power, dignity, freedom and social justice”, was attended by leaders of the said unions, political and associations’ actors and representatives of trade union organizations in different regions, the same source added.

Thousands of protesters chanted slogans against the blockade on social dialogue and government’s delaying in settling issues relating to workers and wage-earners. They also called for implementing of the agreement dated April 26, 2011, protecting trade union liberties, including workers in the reform of the subsidy and pension system and preserving citizens’ purchasing power.

According to the Associated Press, an estimated 8,000 people heeded the call from the three main labor unions to demonstrate in the country’s economic capital.

“We demand the protection of our standard of living,” declared one sign carried by protesters. “No to raising the age of retirement,” said another, anticipating controversial planned reforms of retirement benefits.

Faced with unrest in 2011 during the Arab uprisings, the previous government raised salaries and benefits, nearly bankrupting the country.

The budget deficit rose to seven percent of GDP in 2012 as subsidy spending rose to $6bn a year.

Under pressure from international lending institutions, it fell to the newly elected Islamist-led government of Prime Minister Abdelilah Benkirane to end subsidies on gasoline and gradually reduce them on diesel.

The unions have opposed these moves, saying it hurts low income groups.

“The government is attacking our standard of living by raising gasoline prices by 25 percent in the last 15 months alone, ” Miloudi Moukharek, head of the Union of Moroccan Workers told the Associated Press news agency ahead of the
demonstration. “Reform should not be carried out on the back of the poor.”

On Saturday, Benkirane told supporters the opposition parties were exploiting the union protests for their own ends.