Tangier - King Mohammed VI dedicated on Monday a press house in Tangiers, a socio-cultural compound for the integration of Moroccan media professionals in their Arab and Mediterranean space. 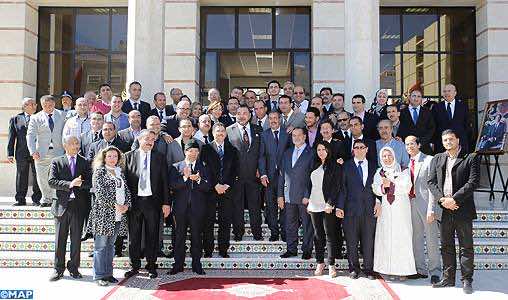 Tangier – King Mohammed VI dedicated on Monday a press house in Tangiers, a socio-cultural compound for the integration of Moroccan media professionals in their Arab and Mediterranean space.

First of the kind in the Arab world and in Africa, the compound is a site for journalists to meet. It offers several services of training, competence reinforcement and leisure.

It is expected to contribute to integrating the Moroccan media in the Arab-Mediterranean space by promoting communication among professionals in the region and the values of freedom, democracy and the rule of law.

The Press house includes a Mediterranean center for media studies and research that will endeavor to reinforce ties between press organizations of the Mediterranean and enrich dialog and mutual knowledge among countries of the region.

The establishment of the center in Tangiers illustrates the place of this cosmopolitan city, crucible of civilizations and ultimate site of inter-cultures dialogue, the third media pole at the national level after Casablanca and Rabat.

Extending over a 5,000 m2-area, the press house also features a continuous training center, a conference room with a capacity of 300 seats, an open-air theater, an exhibition space, a VIP lounge, a sports hall, a children leisure space, a swimming pool, a restaurant and parks.

The compound was built at a cost of MAD 14.3 million in partnership between the communication ministry, the Agency for the development of northern provinces, the Council of the Tangiers-Tetouan region, the urban commune of Tangier and the prefectural council of Tangiers-Assilah.