Washington DC -- As the Algerian presidential elections near, the front runner, President Abdelaziz Bouteflika, has yet to make an electoral speech or a rally appearance. It is a presidential campaign by proxy in every sense of the word. While the United States and the European Union persist in overlooking reports of voters’ intimidation, civil rights abuses and press bullying, the current ruling clan in Algiers press on with their sham election with impunity. 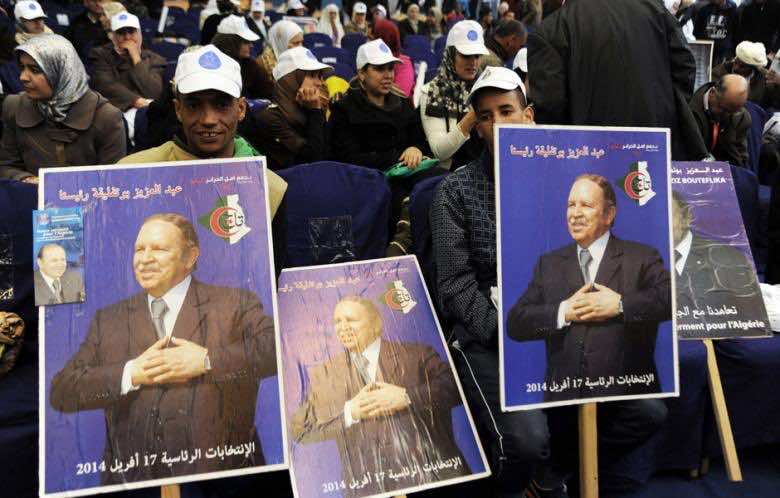 By
Hassan Masiky
-
Hassan Masiky was born in Kenitra, Morocco, and is based in Washington as a blogger and freelance writer.
Apr 8, 2014
Spread the love

Washington DC — As the Algerian presidential elections near, the front runner, President Abdelaziz Bouteflika, has yet to make an electoral speech or a rally appearance. It is a presidential campaign by proxy in every sense of the word. While the United States and the European Union persist in overlooking reports of voters’ intimidation, civil rights abuses and press bullying, the current ruling clan in Algiers press on with their sham election with impunity.

Recent television footage of Bouteflika showed a frail and incapacitated man who may have suffered a loss of function after his stroke a year ago. As the President’s ability to run for office and rule the country is in doubt, Mr. Abdelmalek Sallal, who runs the campaign, has become the “de-facto” candidate. Such disregard to the integrity and intelligence of the Algerian people is bearding a new life into a dormant grassroots opposition movement in the country.

As this electoral “masquerade” continues, the World community looks the other way leaving a critical and potentially dangerous situation degenerate. Reports of renewed ethnic violence in Ghardaia and political violence in the Kabyl Cities of Bejaia and Tizi-Ouzou are early signs of instability and unpredictability.

In “Bejaia, a crowd of 250 demonstrators gathered outside a campaign venue chanting “Bouteflika out”, before some stormed the building, attacking a television crew covering the event and torching portraits of the president”. “Mr. Sellal, the former prime minister, called off the meeting citing security concerns”, according to AFP.

In a similar incident during a stop in Batna, Abdelmalek Boudiaf campaigning for president had to seek refuge in the local police station. Residents of Tizi-Ouzou have jeered Pro-Bouteflika speakers and asked for the president to step down.

The West disregard for the rights and democratic aspirations of the Algerian people goes to reinforce the Algerians view that the Americans and Europeans will support the current Algerian regime at any cost. For Europe, Algeria is a gas producer and an export market, for the Americans Algeria is a vital partner in fighting terrorism.

Some Western observers argue that Bouteflika is popular in Algeria because if his role in ending the civil war. It is true that the President has supporters, but only fair elections can show the extent of his popularity. On the other hand, the North African nation faces other challenges, mostly socio-economic that could spell discontent and possible return to violence.

In short, the world community is willing to tolerate human rights abuses in Algeria as long as the gas is running and the Algerian military is cooperating. The re-election of Bouteflika, healthy or not, insures a status quo much appreciated by the West.

The Algerian public opinion, however, is not taking this “joke” sitting down. In a recent communique, Human Rights Watch (HRW) decried “the open-ended, blanket ban on demonstrations in the capital has been in effect almost as long as Bouteflika has been president.”

HRW reported that “three times during the first week of March, security forces in the capital forcibly dispersed supporters of “the Barakat (Enough) movement,” as they expressed their opposition to a fourth mandate for Bouteflika, who has been president since 1999. On March 1, 4, and 6, security forces tried to block access to the protest site. Security forces confronted protesters who managed to reach the site and started to wave banners and chant slogans.

HRW called on the Algerian authorities to “rescind the 2001 decree banning all demonstrations in Algiers, the capital. “The authorities should create conditions for unfettered debate and competitive elections, including the exercise of the right to peaceful assembly,” HRW added.

Only the future will tell if a re-election of Bouteflika will lead to stability or insecurity and violence. For now, the Algerian people will have to queue for milk, live in unsuitable housing, deal with failing health and educations systems, while their government coffers are awash in billions of Dollars.

The West’s shameful attitude toward the Algerian democratic forces is dangerous and counterproductive; the reelection of Bouteflika will postpone the inter-fighting and power grab within the ruling clan but will not insure the stability of Western interests. Only a democratic and orderly transfer of power in a transparent election will protect European vested “benefits”. For now, Bouteflika will likely win in rigged elections and the West will surely sleep better.