By
youssef sourgo
-
Youssef Sourgo is currently a Master’s student in Linguistic and Literary studies at Ain Chok Faculty of Letters and Humanities.
Apr 10, 2014

Casablanca- In a recent video posted on YouTube, a young Sahrawi denounced the recruitment of Sahrawi youth to the Polisario’s armed militia.

The video came as a response to another video posted a few weeks ago, in which a Sahrawi called on the Sahrawi population to stand up against the Polisario leadership by defending their rights through a project entitled “A Minute of Truth”.

The young Sahrawi in the video identified himself as a member of the Sahrawi Movement for Change, which carried out several initiatives through which it denounced the Polisario leadership.

In the video, the young man condemns the recruitment of young Sahrawi people to the Polisario’s militia, citing his own experience as an example. According to him, he was forced to join the militia when he was 15 years old, and spent 1 year training to use weapons.

According to the Sahraw whose name was not disclosed, what he experienced as a young soldier in the militia was not an exceptional case. The Polisario requires all Sahrawi children who escaped expatriation to Cuba to spend several years away from their families.

The young Sahrawi man also demanded that the leader of the Polisario, Mohamed Abdelaziz, and other officials in the Front be replaced.

This video comes after a series of leaked videos in which young Sahrawis denounce what they describe as the abuses committed by the leadership of the Polisario against dissenting voices in the Tindouf camps.

In one of the videos posted on YouTube last month, a young  Sahrawi described the dire situation of the population in the camps and called on the international community to find an “urgent resolution” to their long-lasting suffering.

Polisario Hit by Adultery Scandal, Revelation of Weaponization of Sex 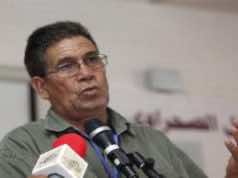