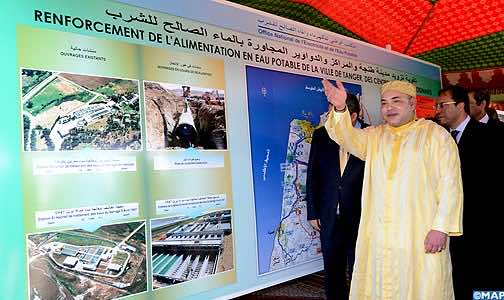 The pilot project falls in line with the Royal speech of July 30, 2000 in which the Sovereign reiterated resolve to carry on the dam-construction policy, started by his  father, the late Hassan II, following an innovating vision based on rational management of water resources.

Located over Kharroub river, 45 south of the city of Tangiers and 22 km east of the city of Assilah, the dam will contribute to consolidate water facilities in northern Morocco with the aim of meeting the increasing drinking and industrial water needs and mobilize new available resources, mainly surface water.

The landmark project aims to generalize access to drinking water, improve citizens’ living conditions and health, end the isolation of local populations, develop environmental tourism, and will create 470,000 working days during the 60 months of the project construction.

With a storage capacity of 185 million cubic meters, the hydraulic structure is financed by the state of the United Arab Emirates and the state general budget.

As part of the upgrading of the Kharroub dam zone, a development program for the Kharroub river upstream catchment area is carried out by the High Commissioner for water and forests and fight against desertification with a budget of MAD 22.4 million.

The program will contribute to fighting against soil erosion, preserving eco-systems, rehabilitating the 8,000 ha forest zones, breaking the isolation of 28 localities in the region and preventing floods.

A program meant to consolidate drinking water supply to the city of Tangiers and the neighboring localities and centers is being carried out by the national Office of Drinking Water and Electricity (ONEE), with investments worth MAD 1.35 billion.

The program will benefit over 1.7 million people by 2030. It consists in expanding the “El Hachef” plant for the treatment of water coming from the “9 April 1947” dam, to reach an additional flow of 1,400 liters/second, and increase drinking water supply in the Tangiers-med Port by building a treatment plant with a capacity of 300 liters/second.

The “Kharroub” dam, which is part of the dam-construction policy followed for several years by Morocco, will enrich the national hydraulic facilities and reinforce the irrigation and flood-prevention facilities.