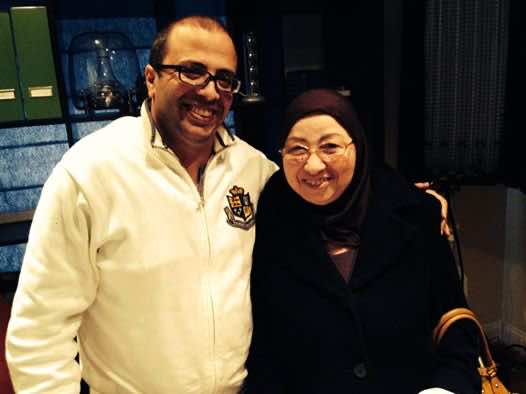 Washington- True Story: I was born in Medina Kdima and grew up in Derb Sultan, in Csablanca. To this day, I am proud of being ‘Casawi’ (native of Csablanca) and ‘Weld Mdina Kdima’ (from the old part of the city). I grew up like any other kid in Houma (neighborhood). We played in the street and never set foot in a daycare. The beach and pools were free for us wled medina and our favorite pastimes were at the HAMAM and playing all sorts of sports. We knew our limits.

My mom was a small business owner in the neighborhood and growing up around her work, I had seen her suffer; having to face challenges of all kinds, including corruptions with Mkdadmias (low ranking employees of the Ministry of Interior). At times she had to borrow money to provide my sister and I with the things that make kids happy; often new clothes for Ramadan or other festivities.

From an early age, I learned the importance of networking. My mom always had this instinct that we will not be in Morocco for long. Knowing this, she held countless dinner parties for my cousins who lived in Europe hoping one day we will join them and move to France or Amsterdam.

When I moved to the States at age 17, I stayed in touch with my mom, sharing with her stories of spending nights in the New York subway or distributing church flyers in exchange for a meal. My mom was the first to know I had started my first business selling hot dogs. I used to tell her that selling hot dogs in New York was not easy but she replied, “Son, whatever you will do is much better than staying in Houma.” I assume my mom considered growing up poor in Morocco to be a shame and that what she saw in my future in Morocco—ending up selling drugs in the streets of Medina Kdima—was not the bright future she wished for me.

Then I moved to DC and decided to pursue my education with the help of a Tunisian friend—a journey taking 5 years of bartending at night clubs and day time college. Finally, I earned not one but two degrees, the first in my family; one in broadcast journalism TV and the other in IT Systems. All I wanted was to earn my mom’s respect and it saddened me that she did not want me to be in Morocco. Again she told me “Son, your future is not in Morocco.”

In 1998 my mom had decided to move to the US and she never returned to Morocco. Having gone through 2 heart surgeries and one pacemaker, I realized she wanted me to be with her in the US because of her health condition. She needed us here and her life depended on us. She was convinced that if she were to stay in Morocco, she would not survive. In fact, her operation cost over $200,000. Thanks to insurance, my mom got 5 star treatment, yet I felt as if we were in the US for one reason: for my mom. Still I wanted to prove to my mom that I could be successful in Morocco. After all, why not? I speak the same dialect and knew for certain that I could succeed. Others had succeeded in Morocco who had also started from scratch.

When I travel to Morocco I always tell my mom that Morocco has potential and that I saw many people succeeding and making a difference. Now I realize I thought this because I wanted to believe it, not because it was necessarily true. The Fact now I work as cameraman/ correspondent of Moroccan TV channel Al Oula is also good because I tell myself that did not waste that degree. My mom still did not change her mind. Even though I praise myself for doing noble things which I will be paid for, her response is still “one day you will understand.”

Since 2006 I have worked very hard to open office of my company AVActions in Morocco. I faced endless challenges, including the banks’ refusal to loan us money. I wanted to succeed in Morocco passionately and was patient enough until I was able to come up with the funds myself a couple years ago. Our goal is to replicate our work in the US: event management and audio visual as well as working on other projects creating documentaries. Our inventory is sufficient and we have the potential to get off to a good start given our networks and strong friendships with people I consider my mentors. I felt like I was on the right track. I wanted my Mom to know that it was ok that we were poor and that her son could be successful in Morocco.

It seems she was right all along. I started working for Moroccan Broadcasting Compnay (SNRT) in the early 90s for free. Then I became an SNRT correspondent which was great since I had freedom to cover more of the stories that were covered only when the SNRT crew was here. I never cared when I would get paid because I loved covering the news and people’s success stories. When SNRT delayed our payment due in 2011, I justified it as being part of the system and we would just have to live with it.

When we heard that SNRT was going through financial issues, we said “it’s ok maybe our turn will come.” When I visited their offices in Rabat and was told my signature is wrong, I said maybe my Moroccan signature is in need of an update. Yet I sign thousands of checks every year here at my office avactions and was never told that my signature was wrong. When they told me that I had to change the contract, I said ok. In my business in the United States, we get paid in advance a majority of the time and no later than 60 days at other times. Why must we suffer if we decide to invest in Morocco?

I use SNRT as a model of how small business owners are affected. For me, the Moroccan dream has been long overdue and although I heard many versions of how it can come true, I now know it is impossible.

Today I realize that my mom was talking about the bureaucracy she had to deal with in Morocco. Now I understand that is not being poor that is a shame in Morocco, it is blatant discrimination because you do not belong to certain class. Now I understand that SNRT is just an example of how the bureaucracy is bad (corrupt?).  For those hold sway on the system people like me and my mom are just another Moroccan immigrant. These painful memories of her past were why my mom never wanted to return to Morocco. Now even I am thinking to sell the business in Morocco and move on.