Rabat- Moroccan women organized a March in Rabat to denounce the government’s lack of will to implement the provisions of the constitution on gender equality. 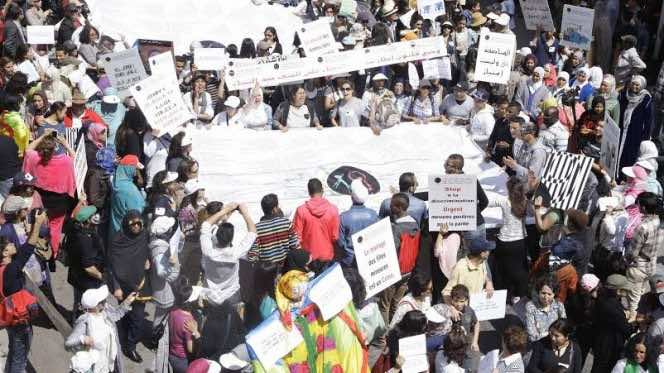 Rabat- Moroccan women organized a March in Rabat to denounce the government’s lack of will to implement the provisions of the constitution on gender equality.

Between 1,000 and 1,200 people marched on Sunday morning in Rabat in response to the call launched by Civil Coalition for the Implementation of Article 19 in the Moroccan Constitution. Demonstrators, who came from all corners of the country, including from distant cities such as Laayoune and Guelmim, denounced Benkirane government’s policy that “blocks the establishment of legal mechanisms guaranteeing the rights of women,” particularly those contained in Article 19 of the Constitution. Demonstrators demanded the elimination of all forms of violence and discrimination against women and girls.

Article 19 of Moroccan Constitution, adopted by referendum in July 2011, clearly calls for gender equality and yet its implementation is taking very slow steps.

Article 19 states that: “Men and women have equal civil, political, economic, social, cultural and environmental rights and freedoms as listed in this article and in the rest of the constitution as well as the conventions and international treaties duly ratified by Morocco in conformity with the constitution’s provisions and the kingdom’s constants and its laws. The state shall work towards the establishment of parity between men and women. Therefore, it has assigned a specialized authority to ensure parity between men and women and fight against all forms of discrimination.”