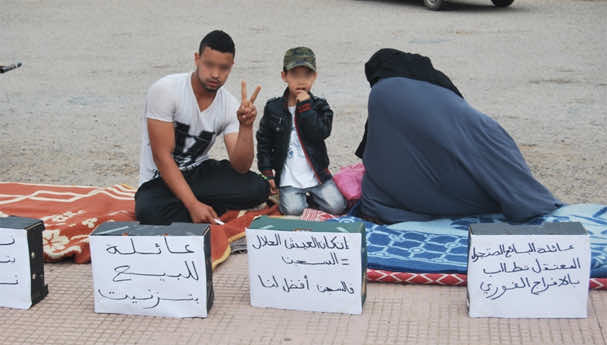 Rabat- A family consisting of four members, including a woman and a little child, offered themselves up for sale in protest against the arrest of the father of the family in Tiznit, Morocco.

Following the new sort of protest staged by the hawker Mustafa Bouadoud, who offered himself up for sale in Beni Mellal, a family of four,, including the mother, two sons, and one daughter, offered itself up for sale in a protest against the arrest of the father of the family in Tiznit.

The family, who protested before the provincial municipal of Tiznit, displayed signs saying “family for sale in Tiznit,” calling on the local authorities to release the father of the family.

The man,  a street vendor of fruit, was arrested in front of the mosque of Assunna, and had his goods seized by the local authorities.

According to Almassa, the street vendor was arrested after he entered into altercations with the security assistant. The latter accused the man of removing a button from his uniform.

According to the same source, a few hours after the street hawker was arrested, his family members decided to engage in a continuous sit-in in front of the municipal building of the city. The family resisted the police’s forceful attempts to prevent them from protesting.

The Public Prosecution in the Court of Tiznit listened on Saturday to the testimonies of many security agents who witnessed the incident, alongside the testimony of the suspect, before the public prosecutor decided to grant the street vendor a provisional release.