Rabat - After he had an accident with Tom Coronel in Marrakech, driver Mehdi Bennani of Morocco was disqualified from the race on Sunday for being underweight. 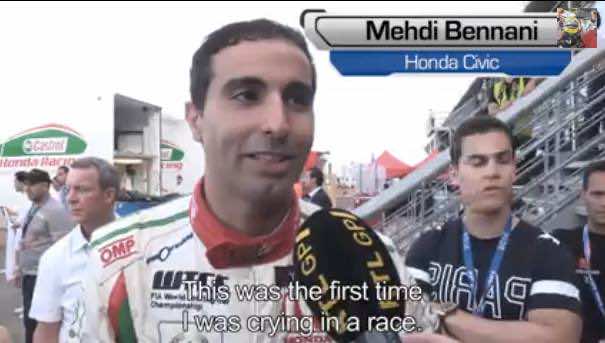 By
Aziz Allilou
-
Aziz Allilou is a student at the Higher Institute of Media and Communications (ISIC) and Morocco World News correspondent in Rabat.
Apr 15, 2014
Spread the love

Rabat – After he had an accident with Tom Coronel in Marrakech, driver Mehdi Bennani of Morocco was disqualified from the race on Sunday for being underweight.

This is big disappointment for Moroccans who were expecting their superstar to shine in the World Touring Car Championship that kicked off on Sunday in Marrakech.

Bennani crashed into Tom Coronel at the startline, and Coronel’s Chevrolet was destroyed after it hit the wall hard and then bounced back across the track.

Bennani has been given a three-place grid penalty for the race next week for the incident, but the worst is yet to come.

After Mehdi Bennani passed Mikhail Kozlowski and was ranked fifth in the provisional results, he was supposed to qualify to the second race of World Touring Car Championship. However he has been disqualified for technical reasons.

According to Touring Car Times, Bennani “has now been excluded as his car has been found to be underweight in scrutinizing.”

According to the same source, “the minimum weight for the Honda Civic, like the Citroën, the Lada and the Chevrolet, which all are running maximum ballast in Morocco and France is 1,164kg.”