Rabat - This month Forbes Middle East released its list of World’s Richest Arabs, which included 6 Moroccans out of 100 business tycoons from 13 countries across the region. 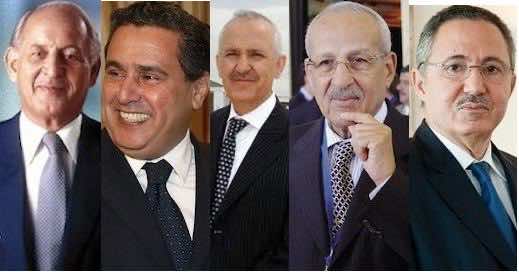 Rabat – This month Forbes Middle East released its list of World’s Richest Arabs, which included 6 Moroccans out of 100 business tycoons from 13 countries across the region.

Morocco has landed in 6th place on Forbes Middle East’s World’s Richest Arabs rankings, with Othman Benjelloun topping the list of Moroccan billionaires. He is the chairman and CEO of BMCE Bank, one of the country’s largest banks, which is active in more than 15 African countries.

Benjelloun,  who invests in banking, insurance and telecom through his holding company, Finance Come, is ranked the top billionaire in Morocco and 13th in the richest 100 Arabs, according to Forbes. His net worth is estimated at $2.8 billion U.S.

Miloud Chaabi, who began as a housing developer in 1948, is ranked the second richest billionaire in Morocco and 26th overall, with a net worth estimated at $1.9 billion U.S.

Through his holding Ynna, Chaabi has expanded his investments into renewable energy, supermarkets and hotels, including the Ryad Mogador chain of low-priced hotels. “He also heads SNEP, a publicly-traded chemical manufacturer, owned 62% by Ynna with a market cap of $77 million,” said Forbes.

The multibillionaire Aziz Akhenouch is ranked the third richest billionaire in Morocco and 33rd in the Arab region, with an estimated net worth of $1.4 billion U.S.

Aziz Akhannouch debuts on the Forbes Billionaires list this year due to his ownership stake in Akwa Group. “He has interests in petroleum, gas and chemicals through its publicly-traded subsidiaries Afriquia Gas and Maghreb Oxygene, as well as in media, real estate development and hotels,” said Forbes.

Sefroui, who heads publicly-traded Groupe Addoha, “forged his reputation winning government contracts to develop low-cost housing in Morocco,” according to Forbes. He is now expanding into other African countries.

His company, which is the largest hotel builder in Morocco, “has focused on middle-income and low-income housing, competing with Moroccan billionaires Miloud Chaabi and Anas Sefrioui,” said Forbes.

The last Moroccan name on Forbes’ list is the diversified Fouad Fahim, who was ranked Morocco’s 6th richest and 82nd overall with a net worth estimated at $220.12 million U.S.

The Fahim family of Morocco controls Delta Holding SA, with an overall stake of 67.58%. “The holding is one of the major industrial players in the national and regional economy, and operates in civil engineering, manufacturing, construction, and logistics, among other areas,” reported Forbes.