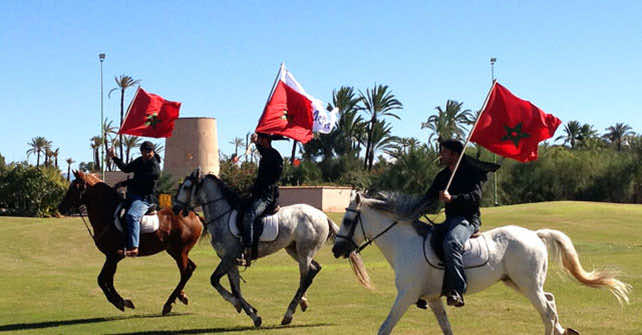 “On Saturday 19th April, British Polo Day, presented by Land Rover, will bring elegance, style and the best amateur traditions of polo to African soil with the inaugural British Polo Day Morocco,” reads a statement made by the organizers.

The Polo match is being held in aid of The Eve Branson Foundation which supports rural communities in the Atlas Mountains.

Guests will enjoy a four-day itinerary in Marrakech’s most sophisticated hotels, including the Royal Mansour, Riad El Fenn, Kasbah Tamadot and the historic hotel Mamounia where the Galla Dinner and Charity Auction will take place.

The event will be attended by high-profile celebrities, in addition to players from the British Army, the Moroccan Royal Guard, the British Commonwealth Team and the Jnan Amar Polo Club.

Polo Day Morocco is an opportunity to showcase British craftsmanship in Morocco with the participation of over 30 British luxury brands such as Land Rover, Hackett, Royal Salute, Justerini & Brooks and many others.

“The aim of my foundation is to create positive opportunities, working in partnership with each village, to bring about both economic and social transformations in Morocco. The British Polo Day Morocco, hosted by Jnan Amar Polo Club is not only an amazing opportunity to bring all the friends of the Eve Branson Foundation to Marrakech for a fantastic weekend, but also the perfect occasion to raise money for a cause that is very close to my heart,” said Eve Branson.

Mr. Amar Abdelhadi, founder of Jnan Amar Polo Club included, “we are honored to be working closely with The Eve Branson Foundation in this prestigious charity event and to be a part of the efforts to raise much needed funds for the women and children of the Atlas Mountains.”