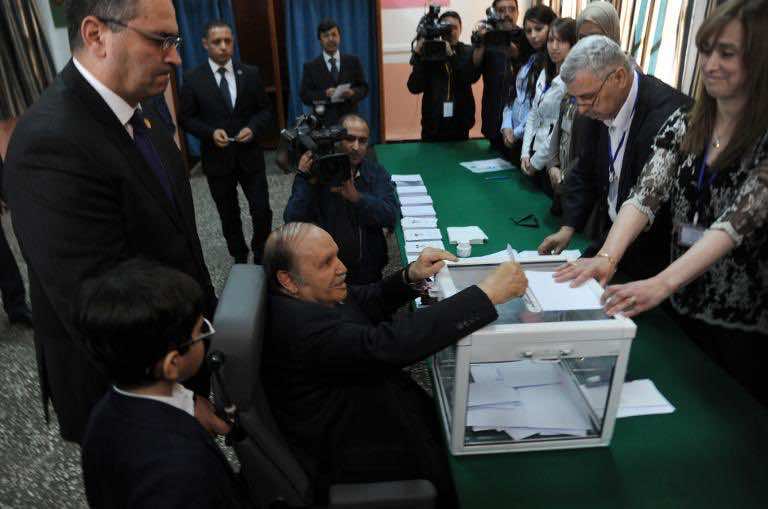 Rabat – As predicted by many analysts, Bouteflika will win the presidential elections in Algeria, some may even say “fair and square.”

The relatively high turnout number of voters and the results that will be presented to the public on Friday April 18 will certainly raise many questions.

Yet, even if the elections have been flawless and the high turnout is true, Bouteflika will still win.

He is considered by a large majority of Algerians to be the savior of the republic, the one who ended the civil war, defeated the Islamic terrorists by offering them amnesty, eliminated the country’s foreign debts, and created jobs,   essentially in the security field. On the international scene, Bouteflika was also able to make Algeria relevant in the fight against terrorism. The West loves him for that and for especially creating jobs in the oil industry for many Europeans, Americans, Russians, and Chinese when the world was going through a major recession and jobs were scarce.

Algeria relies heavily on oil revenues for income and will always be a place for high paying jobs for westerners, at least for the next twenty years. No one is sure of the outcome when these oil and gas fields start to become depleted. It is sad to see that “le pouvoir” as it is called by the people of Algeria invests and creates high paying jobs for foreigners and couldn’t care less about their own. This is why the term “hogra” is so prevalent in Algeria.

In recent weeks, Algerians were faced with a dilemma, to vote or to vote; many obviously chose not to vote. They knew that “le pouvoir” is too powerful to defeat and their only option is to wait and wait. Waiting is now the name of the game in Algeria.

Algerians are sacrificing their future in order to never go back to a civil war, and the Syrian civil war is a vivid reminder as to what they went through during their own civil war.

Algerians are delaying the inevitable: they know very well that most likely than not, their president will die in office and they do not want to worry when that time comes. Right now, they prefer the current peace that most of them credit the Algerian president for.

What about Moroccans? Who are they rooting for? Many Moroccans think that Bouteflika is the hurdle to peace between Morocco and Algeria, and they could not be further from the truth. No matter who resides in El Mouradia, the relationship between Morocco and Algeria will remain hostile, tough, intense, and sometimes hateful. The reason is very simple. An Algerian president is not the one who decides. You guessed it, it is the military junta in Algeria which decides. As everyone knows, the Algerian military junta leaders — or mafia as they is called by Algerians — have made it their life goal to never ever mend fences with Morocco, and the reason again is very simple, peace with Morocco is not economically viable for the junta.

Rather, the Military get their bak-shish from purchasing weapons. Algeria in the last few years has bought more weapons than all African countries combined; the more they buy the more cash goes into their pockets.

Who is the victim in all this?

Primarily the regular Algerian citizen, and secondly the Moroccan citizen. For as long as the military junta in Algeria rules, the Maghreb Union will always remain an unattainable dream. If the people of Algeria decide to rid themselves of the criminals that rule them, there will be hope and there will be peace in North Africa.