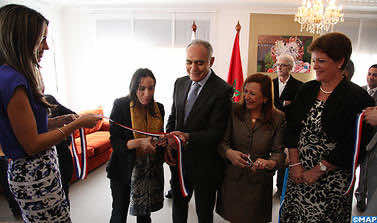 Rabat- The headquarters of the Embassy of the Republic of Panama in Morocco was inaugurated Friday in Rabat, in the presence of the Panamanian Vice Minister of Foreign Affairs, Mayra Arosemena and several Moroccan officials.

The inauguration of Panama ‘s diplomatic mission in Rabat, was attended by Foreign Minister, Salaheddine Mezouar, Minister-delegate for Foreign Affairs and Cooperation, Mbarka Bouaida, Panama’s ambassador to Morocco, the Latin American diplomatic corps accredited to Morocco, and the US Ambassador in Rabat.

The Panamanian Vice Minister of Foreign Affairs welcomed, in a statement to the press, the opening of Panama’s embassy in Morocco, expressing her country’s readiness to promote bilateral cooperation with Morocco.

She expressed optimism about further strengthening bilateral economic and trade relations,  adding that Morocco is a gateway to Africa, while Panama is considered an entry point to South America, Central America, and the Caribbean.

For her part, Bouaida said the inauguration of the Panamanian Embassy in Rabat is a landmark in Moroccan-Panamanian relations which is heralding a promising future in terms of political and economic exchanges.

The Minister also noted that the withdrawal by Panama of its recognition of the so-called-SADR is part of the efforts of Panama to consolidate relations with all its partners in Africa.