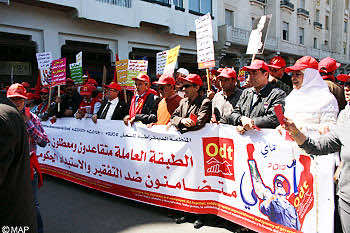 By
Aziz Allilou
-
Aziz Allilou is a student at the Higher Institute of Media and Communications (ISIC) and Morocco World News correspondent in Rabat.
Apr 22, 2014
Spread the love

Rabat–The Democratic Labor Organization (ODT) led over 1500 protesters on Sunday in the march of “the black spring” in Rabat, against the “dire” economic and social conditions.

On April 6th, the three main Moroccan trade unions protested against the deterioration of the social and economic conditions of the working class wage earners.

However, the ODT sees that the government did not show any signs that indicate a reform in the austerity plans, even after the dialog between Benkirane and the trade unions’ representatives.

Escalating the situation, the ODT gathered over 1500 protestors on Sunday in the march of “the black spring,” threatening Benkirane and emphasizing the need for an urgent solution to the dire economic and social conditions.

According to Akhbar Alyaoum, the march that started from Bab El Had, Rabat, included the participation of employees, pensioners, licensed teachers, graduate students, trades, craftsmen, the Federation of the Independent Trade Unions, farmers, taxi drivers and medical school graduates.

Protesters chanted slogans against the Abdelilah Benkirane and the government’s policies, such as  “Benkirane didn’t do anything… He must leave.”

Ali Lotfy, Secretary General of the ODT, said that this march followed the march of April 6th and called for “higher salaries, the preservation of purchasing power, the increase of minimum wage, and its extension to encompass the workers of agricultural sector, the revaluation of pensions, the extension of social coverage, the revision and reactivation of the Labor Code, and the protection of trade union rights.”

Lotfy expressed a sense of hopelessness regarding the social dialogue, saying that it did not produce the long-awaited fruits. “As evidence, as soon as the dialogue was closed, the government has increased the fuel prices and the announced that there will be no increase in wages,” he explained.