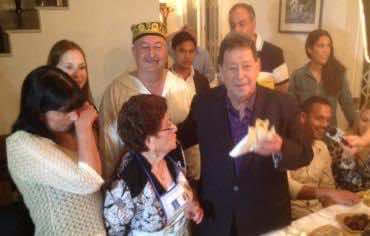 By
Aziz Allilou
-
Aziz Allilou is a student at the Higher Institute of Media and Communications (ISIC) and Morocco World News correspondent in Rabat.
Apr 23, 2014
Spread the love

Every year, as the Passover holidays are closed, Jews from Morocco don traditional dress and get ready to start celebrating Mimouna, a festival that features sweets, music, and visits to family members and to the homes of community dignitaries.

Yet, Mimouna is no longer associated only with Moroccan Jews. Mimouna celebrations in Israel have now become a strategic venue for Israeli politicians to attend.

The Mimouna celebrations that kicked off on Monday night nationwide in Israel witnessed the participation of both of the leading candidates for the presidency, MK Reuven Rivlin and  MK Binyamin Ben-Eliezer, at the central Mimouna celebration in the city of Elad.

The central celebration was hosted by the mayor of Elad, Yisrael Porush, who was dressed in gold Moroccan garb, and it featured also the participation of Hatnua MK Meir Sheetrit,  who is the only presidential candidate born in Morocco.

The crowded race for president “shifted on Monday night from the Knesset to homes of Moroccan Israelis as candidates attended celebrations of the post-Passover holiday Mimouna,” reported JPost.

According to the same source, the candidates in the race that will be held in the Knesset sometime between late May and late June “used Mimouna celebrations to try to show that they are loved by the people.”

Speaking about Mimouna, Former Israeli Supreme Court Justice Dalia Dorner remarked that Israel has assimilated “the exiles” beautifully. “From the East and West, immigrants came here to fulfill the Zionist dream of the Jewish people. Maintaining the traditions and customs of our fathers taken from our birthplaces is not only moving nostalgia, it is also the secret of the strength of our nation,” she explained.