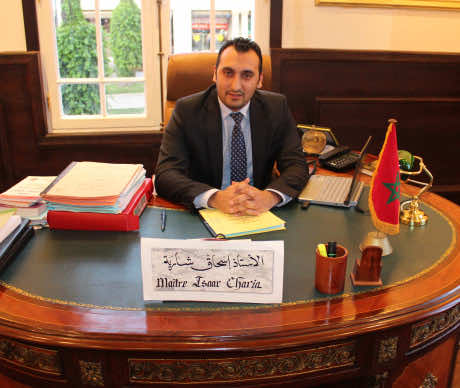 By
Aziz Allilou
-
Aziz Allilou is a student at the Higher Institute of Media and Communications (ISIC) and Morocco World News correspondent in Rabat.
Apr 25, 2014
Spread the love

Rabat- It was rumored recently when Moroccan lawyer Isaac Charia asked to join the Islamist party PJD that Charia is a Jew. However, Charia stated subsequently that he is not a Jew, but a Muslim. One of his colleagues in the Rabat Bar Association has said that “Charia has disavowed his religion,” a journalist for Akhbar Alyaoum claims that Charia just wants “fame,” while a PJD official has commented that the controversy “is childish.” MWN investigated this controversy.

Everything started when Akhbar Alyaoum stated in its April 19th issue that Charia is a ”Jewish Moroccan lawyer who wants to join the ruling Islamist party PJD”.The article, which was published on the front page of Akhbar Alyaoum, was entitled “Precedent… a Jew  Prepares to Join the Head of Parliament’s Islamist party.”

A few days later, in interviews with many local news websites and newspapers, Charia harshly criticized the media that had promoted rumors that he is Jewish, confirming that he is a Muslim.

In a recent phone call with Morocco World News, Charia explained that he is not a Jew  “My name is Isaac Charia, my father is Tayeb Charia, and my grandfather‘s name was Ahmed Charia, the son of Mohamed Charia…,” he said.  “I am from a Muslim family from Andalusia in southern Spain.”

He added, “As for my first name Isaac, there are plenty of Muslims who name their sons Isaac. This name is not associated only with the Jewish people.”

Issac Charia and the Journalist if Akhbar Alyaoum

In his previous interview with Akhbar Alyaoum, when a journalist asked him, “why did you choose to join the Islamist party although you are a Jew?,”Isaac responded that he had decided to join the PJD because he was drawn to the party’s principles against corruption.  Yet, Isaac did not at the time deny that he is a Jew.

Amal Aboulaala, the journalist for Akhbar Alyaoum who interviewed Charia, confirmed to Morocco World News that Isaac did not then deny that he is Jewish. She stressed that “he avoided talking about his religion.”

“Isaac Charia intended to provide camouflage in his responses to the questions about his religion, because he is trying to achieve fame,” the journalist asserted.

Replying to the journalist’s statements, Charia said that Amal Aboulaala misunderstood what he was trying to say. “I avoided talking about my religion, not because I am a Jew, but because I wanted to confirm that PJD is a political party, and we should separate politics and religion.”

Charia and his colleagues in the Bar Association

Media reports aside, we wondered what is the perception of Charia among his colleagues in the Syndicate in Rabat? Do the lawyers know anything about his religious affiliation?

“None of the lawyers in the Rabat syndicate knows about Isaac’s religion,” said Marouri.

“I read Akhbar Alyaoum’s interview  with Isaac Charia on April 19th, in which the newspaper reported that he is a Jewish lawyer who wanted to join the Development and Justice party. Later, I was surprised to watch other interviews of Isaac published on many news websites, in which he was stressing that he is Muslim,” he explained.

Issac Charia and the story behind the rumor

Regarding the rumor that he is a Jew, Charia explained to Morocco World News that he had sent an open letter to the PJD officials requesting to join the party.

“I explained in my letter that I am a liberal and modern Muslim man who believes that we should separate politics and religion. I also expressed that I have ideas that oppose the party’s principles. But, I am interested in the honest willingness of the PJD to fight corruption in the country.” He added, “Yet, I was surprised later that my letter was published on the party’s official website without requesting my permission. My letter was headed with a title that said ‘Precedent… a liberal activist wants to join the Islamist party,’” Isaac explained.

Charia explained that PJD officials addressed his article to the media, “in order to paint my request for a liberal activist to join the PJD as a victory for the Islamic party.”

Reading the Islamic creed, Isaac renewed his condemnation of those claiming that he is Jewish, and affirmed that he is Muslim.

“There is no god but God, and Mohammed is his prophet,” he said.

Charia told Morocco World News that his letter is a challenge to PJD officials, saying “I want to know if the PJD can accept people who oppose the party’s principles, and I am still waiting for a response from party officials.”

Morocco World News tried to contact Bouanou Abdellah, the president of the PJD in the House of Representatives, but Bouanou refused to comment on the issue, calling the controversy “childish.”