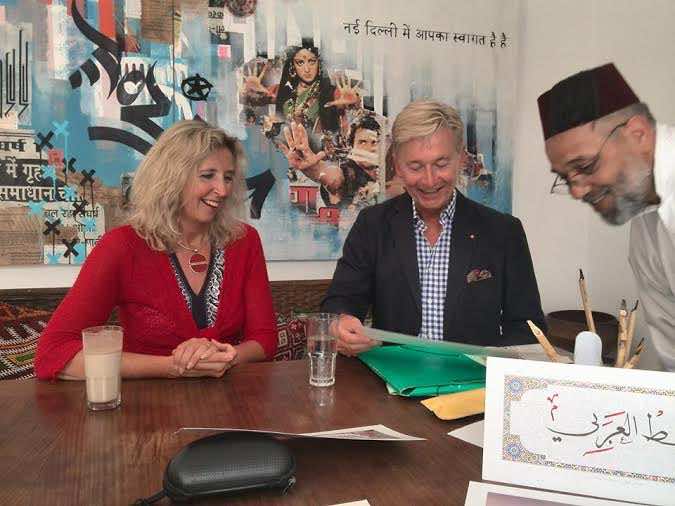 Marrakech – Mike Richardson’s Cafe Clock saw its official opening in Marrakech on Saturday April 26th in a lively, well-attended event with British Ambassador Clive Alderton and his wife Catriona. A number of the English-speaking community in Marrakech and many other Marrakechis were present.

Ambassador and Mrs Alderton enjoyed a lesson in Arabic script and there was a henna specialist decorating ladies’ hands and feet on the large terrace on the roof above the café. There is a great view from the terrace of the street just a few minutes from Marrakech’s historic casbah.

In a short address, the Ambassador praised Mike Richardson and his team’s  initiative and expertise in creating Café Clock in Fez and now Marrakech and helping to preserve Marrakech’s heritage of storytellers and traditions practiced on the Place Jamaa El Fna. He commended the creation of a cross cultural meeting place for Marrakechis of all nationalities. He called this an unusual and particularly British creation. He also unveiled a plaque celebrating the occasion of Café Clock’s opening, which will be proudly displayed on its wall.

When BBC journalist Richard Hamilton read from his book The Last Story Tellers of Marrakech at Café Clock during this year’s Biennale, he noted that the great storytelling tradition recognized by UNESCO  was in danger of dying out as only 6 storytellers were left. As sitdown restaurants and orange juice stalls expand on Storytellers Place, art and oral tradition need a helping hand to preserve the heritage and the stories. Cafe Clock has  provided not only a new audience and space for the storytellers but also a unique program to train new apprentice storytellers, some of them young Moroccan girls who can also tell the tales to the audience in English.

A delicious lunch of salads hummus and mini camel burgers was served, washed down with almond and other juices. Café Clock’s retired master storyteller Haj Ahmed Ezzaghani launched into a story about Joha and the King with Shakespearean eloquence, a flowing cloak, and great animation. This was followed by a rendition by Sara Mouhi,  a trainee English language teacher at the American Language Center, of the Joha story In English, telling how the King’s adviser tried and failed to have Joha beheaded by having the King ask Joha three seemingly unanswerable questions with a death sentence if Joha failed to answer correctly, and how Joha evaded death with the help of a donkey.

Café Clock is a great new addition to Marrakech’s cultural and social scene, driven by Mike Richardson’s boundless energy and the enthusiasm of his young team.