Marrakesh- Tahar Ben Jelloun is exhibiting his paintings at the Tindouf Gallery in Marrakech. 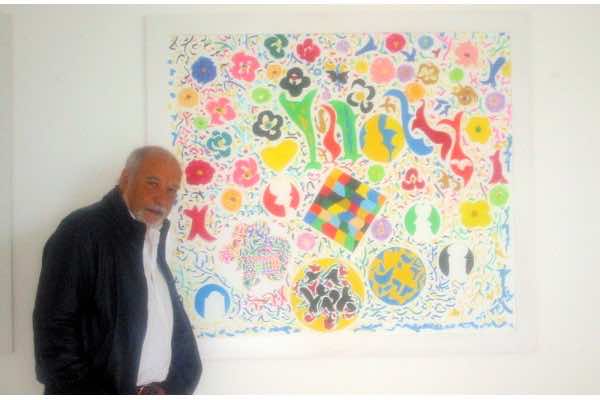 Marrakesh– Tahar Ben Jelloun is exhibiting his paintings at the Tindouf Gallery in Marrakech.

He’s disarmingly modest about his creations, describing them as an arrangement of colors and shapes originating from doodles made while on the telephone. Of course, nothing that his exceptionally gifted mind produces is to be dismissed quite so lightly. Indeed, last year these paintings received critical acclaim at an exhibition in Rome.

There is nothing heavy or complicated about Ben Jelloun’s paintings; they are a delightful expression of natural joy in bright, engaging colors:, flowers, butterflies, and bird-like forms. There are desert scenes, and a ghostly white marabout which appears in different paintings. The last time I met Tahar Ben Jelloun here at the Tindouf Gallery was when he and the late Claudio Bravo published a book on marabouts in Morocco and their solitary, spiritual and intimate beauty as places of pilgrimage for the devout.

You may also notice amongst the small colored shapes in the exhibit other symbols which recall shapes in Arabic script and illustrations on ancient walls. The desert scenes convey the stillness and calm of Morocco’s southern sands, contrasted with strange buildings like long-deserted casbah ruins. Tahar goes into the back room brings out another desert scene with strange ruins peering down at us over the dunes. What we see is Tahar Ben Jelloun‘s mind in repose, a colorful, sublime mediation and moments of sheer amusement. The picture you see upon entering the gallery has a globe of patchwork colors with two smaller planets on either side, whorls like colored ribbons, and many shapes that could be birds in flight. The lower part of the canvas is covered a field of little flowers.

In his recently published book, A Letter to Matisse and Other Writings on Art, Ben Jelloun explores the art of Matisse and Moroccan painters. He reflects on Matisse’s visit to Morocco and the effect it had on his art. Matisse spent seven months in Morocco from 1912 to 1913, he creating about 24 paintings and numerous drawings. Included in these paintings was Window at Tangier, the view from his hotel window. Ben Jelloun affirms that this period in Morocco influenced Matisse’s later oriental paintings. He writes in Letter to Matisse that the vision of the East came from within the painter; he was not merely reacting to what he saw. Tahar Ben Jelloun also writes about other painters, some of whom he knew personally, including Jilali Gharboui, Mohamed Kacimi, Hassan El Glaoui, Chaibia Talal, Belkahia Farid and Bellamine Fouad.

His other recent work, Ablation, is very different. It covers the effects on those who have had their prostrate surgically removed. It has been a taboo subject but affects many men who have experienced the side effects of the procedure, which include incontinence and loss of sexual stamina. It is a deeply personal predicament which many face as they age. Ben Jelloun breaks the taboo, and as he discusses their condition with the sufferers, he is deeply touched by their situation. He is a writer who considers the human condition from every angle, including death, despair and even the prospect of suicide. He points out that cancer was once a taboo but is now discussed openly.

He recounts how many wives sought to find ways to understand their husband’s condition alone because their partners would not discuss it out of embarrassment or fear. He defines his work in Ablation as an attempt to find a way to confront the fate that awaits us and learning to live with the new life circumstances and learning to live with this suffering. Tahar Ben Jelloun is a relentless explorer of the human condition and man’s relations with the world around him. It is good to know, however, that there are also flowers, bright colors and delight in his vision.