Rabat- Tens of thousands of people demonstrated in Morocco on Thursday to maintain pressure on the head of government, Abdelilah Benkirane, despite the announcement of plans to increase the minimum wage. 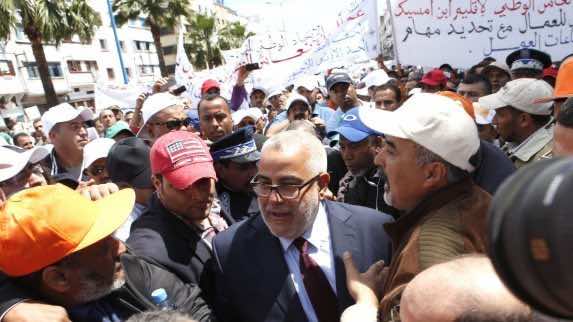 By
Aziz Allilou
-
Aziz Allilou is a student at the Higher Institute of Media and Communications (ISIC) and Morocco World News correspondent in Rabat.
May 2, 2014
Spread the love

Rabat- Tens of thousands of people demonstrated in Morocco on Thursday to maintain pressure on the head of government, Abdelilah Benkirane, despite the announcement of plans to increase the minimum wage.

Over 50 sectoral unions representing the Morocco Labor Union (UMT) celebrated in Rabat on Thursday, International Labor Day. The mobilization witnessed the participation of ten of thousands of people under the slogan ’’United to Face the Challenges and Achieve the Just Demands of the Working Class.’’

El-Miloudi El-Moukharik, Secretary General of the UMT, took to the platform that stood before the UMT’s headquarters on Aljaich Almalaki Avenue and welcomed the crowd who had gathered to vent their anger at the Labor Day celebrations. Members of the Democratic Federation of Labor (FDT), and the Democratic Confederation of Labor (CDT) were well-represented in the crowd.

According to Akhbar Alyaoum, the massive demonstration was also attended by significant numbers of the Progress and Socialism Party leaders, such as Hussen Elouardi, Minister of Health, Nabil Benabdellah, Minister of Planning and Urban Policy, and Mohamed Amin Sebihi, Minister of Culture, as well as Nouzha Sekalli and Khalid Nassiri.

Addressing the enthusiastic crowds, Miloudi El-Moukharik harshly criticized the government and the General Confederation of Enterprises of Morocco in his speech.

According to the same source, El-Moukharik claimed that the government implements unpopular policies, although it recently announced a minimum wage increase.

Moukharik said that this increase does not satisfy the unions, which are still calling for higher salaries, the preservation of purchasing power, the extension of the minimum wage increase to encompass workers in the agricultural sector, the revaluation of pensions, the extension of social coverage, the revision and reactivation of the Labor Code and the protection of trade union rights.