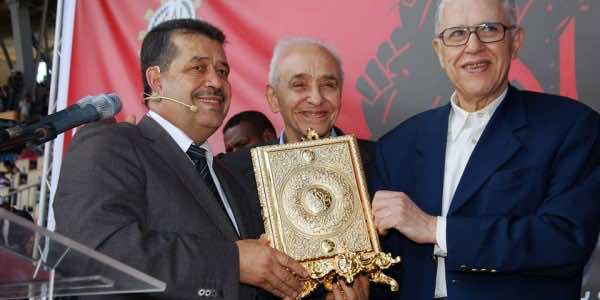 By
Aziz Allilou
-
Aziz Allilou is a student at the Higher Institute of Media and Communications (ISIC) and Morocco World News correspondent in Rabat.
May 2, 2014
Spread the love

It seems that Hamid Chabat did not fulfill his promise. After he promised to gather at least 120,000 people in a vibrant Labor Day celebration, only 20,000 of the party’s activists attended the festivities on Thursday at  the Prince Moulay Abdellah Sports Complex in Rabat.

Yet, the Secretary General  of the opposition party Istiqlal was a happy surprise for the Istiqulal activists when he stepped onto the platform, holding the hand of the former head of the Istiqlal party, and former Prime Minister Abbas El Fassi.

After Hamid Chabat had gone through many battles with the El Fassi family, since he was elected the new head of the party, this move seemed to announce that the party is now united after it nearly split.

According to Akhbar Alyaoum, Hamid Chabat paid tribute to Abbas El Fassi before over 20,000 people, and dedicated a gift to him. This was a clear warning to his enemies. It indicates that henceforth, Chabat will put all the focus on them, as the internal party battles are over.

Unlike the usual marches, Chabat chose to celebrate Labor Day this year in a massive mobilization at the Prince Moulay Abdellah Sports Complex.

Before the festivities kicked  off at 9am, hundreds of busses coming from diffrent regions of the kingdom arrived at the complex.

According to the same source, Hamid Chabat sent many political messages to the head of the government through this mobilization. Chabat  showcased  the great achievements of the former government of Abbas El Fassi, compared to the current government’s minor achievements.

Chabat concluded, some parts of ‘’Morocco are still occupied, and we are not ready to give up any inch of our land.’’