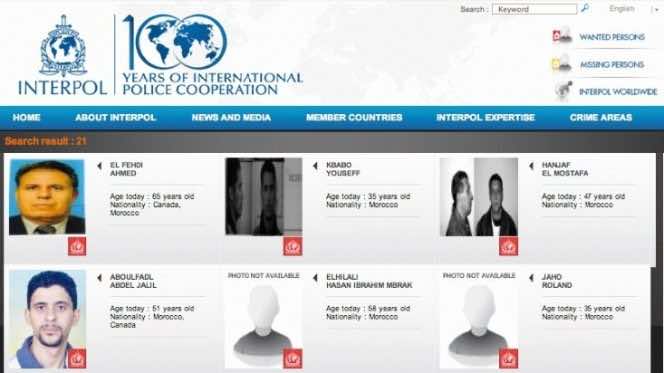 By
youssef sourgo
-
Youssef Sourgo is currently a Master’s student in Linguistic and Literary studies at Ain Chok Faculty of Letters and Humanities.
May 9, 2014
Spread the love

The International Criminal Police Organization is on the lookout for twenty-one Moroccans, most with dual nationality, according toAssabah’s Friday issue.

Three of the twenty-one fugitives are accused of being involved in terrorist activities, according to the same source. International arrest warrants have been issued for them by the Spanish authorities.

One of the wanted Moroccans is accused by Spanish security services of assisting the leader of the terrorist cell responsible for the terrorist attacks in Madrid on March 11, 2004.

The other Moroccan fugitives are wanted for various other crimes, including child abduction, rape, murder, drug trafficking, theft of property and forgery of official documents.

37 year old Imane Maalaoui from Casablanca is the only female fugitive among the twenty-one Moroccans wanted by Interpol. The Canadian authorities have accused her of child  abduction.