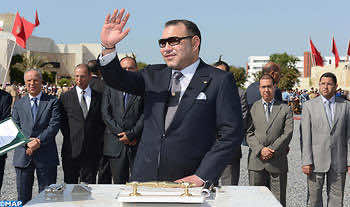 Worth 140 million dirhams, the future facility, meant to welcome Moroccan, African and Arab students, is part of the implementation of a strategy seeking to instill Islam’s values into next generations of Imams (religious scholars), Murshidines and Murshidates (preachers) in order to shield Morocco against extremism, safeguard its identity marked by balance, openness and tolerance and reinforce its religious influence.

The new institute will contribute, through training programs, to strengthening the Kingdom’s spiritual and religious immutable values, mainly the Ashaarit dogma, the Malekite rite and the Sunni Sufism which are shared Islamic precepts in several Western African countries.

The Mohammed VI Institute for Imams, Murshidines and Murshidates Training, to be built over a surface area of 28,687 square meters, will comprise a pedagogical and administrative department, a housing and catering department and a socio-sports department.

In addition to its role in preserving Morocco’s spiritual security and the Malekite rite’s unity, the future institute will foster Morocco’s partnership with Western African countries following HM the King’s decision to respond favorably to demands of providing training in Morocco for imams and preachers from these countries.

Thanks to its pedagogical and administrative staff, the facility will also provide training for Arab and African imams mainly from Tunisia, Libya, Mali, Guinea, Gabon, Côte d’Ivoire and the Maldives.