Riyadh - Morocco is taking part in the first economic and cooperation forum between the Arab world and central Asia-Azerbaijan that opened on Tuesday in the Saudi capital. 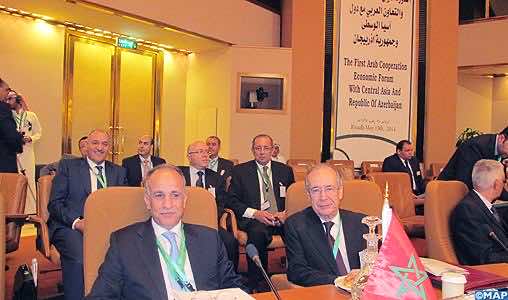 Riyadh – Morocco is taking part in the first economic and cooperation forum between the Arab world and central Asia-Azerbaijan that opened on Tuesday in the Saudi capital.

Morocco is represented by delegate minister of external trade, Mohamed Abbou, Moroccan ambassador in Egypt and Saudi Arabia and top officials from the ministry of foreign affairs and cooperation.

Held by the Arab league, the forum seeks to bolster political, economic and cultural cooperation between the two regions.

It is part of the strategic dialog that the Arab group is seeking to develop with other groupings such as the European Union, African countries, China and Japan.

A memorandum of cooperation between Arab countries, central Asian states and Azerbaijan and a final statement are scheduled to be adopted at the end of this first forum.