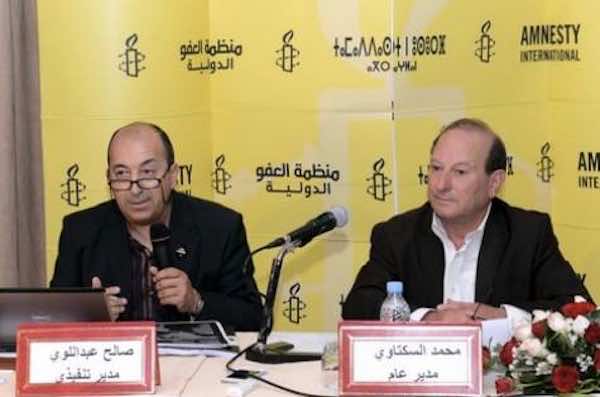 Kenitra – Twenty-one years after Morocco’s ratification of the International Convention Against Torture, a considerable number of Moroccan citizens are still reporting torture during detention.

According to a report presented by Amnesty International Morocco in Rabat on Tuesday, the alleged torture takes various ways such as: severe beating on the head and, raping with glass vials, and putting the detainee’s head in the toilet bowl.

The general director of AI Morocco, Mohamed Sektaoui, called on the Moroccan government led by Abdelilah Benkirane to work on the adoption of effective measures and essential guarantees in order to put an end to torture in Morocco.

‘‘We would be happy if the government responded positively to our request,’’ Mohamed Sektaoui said according to Hespress.

Sektaoui recounted the number of actions taken by Morocco against torture and to promote human rights such as: the establishment of the Advisory Council for Human Rights, the creation of Justice and Reconciliation Commission, the criminalization of torture, the ratification of a UN agreement against it and the ratification of a number of international agreements.

But he said that  “in light of the continuous flow of reports of torture during detention, a lot of promises and commitments made by the state are proving false.’’

Amnesty International has criticized Morocco for not subjecting officials involved in cases of torture to judgment.

Sektaoui pointed out that Morocco has failed to investigate those involved in the torture cases.’’ He added that such acts lead to an increase in the number of  victims of torture, which is confirmed by official complaints directed to the Public Prosecution and the National Council for Human Rights.

Concerning the ‘Amnesty campaign in Morocco, and four other countries, Sektaoui said there is an ‘’unprecedented opportunity to eradicate the phenomena of torture in Morocco.’’

He added that ‘’we are not the only ones who say that there is torture in Morocco, there is the National Council for Human Right which says so, too.’’

He mentioned that the progress Morocco has made in the field of human rights, by agreeing to a number of international agreements, criminalizing torture and recommending the Justice and Reconciliation Commission, are all considered to be positive signs.

‘’We chose Morocco because we have a great hope that it will step forward on the road to ending torture, he said.’’

Though Amnesty International said that the phenomenon of torture in Morocco is still ongoing, Sektaoui pointed out that this torture is not methodical, as it used to be.

He said that the main challenge is that the court system “is failing to open investigations into the allegations of torture,’’ putting the responsibility on the governments’ shoulders, on which he said there is already a lot of pressure because it is the first government to be chosen by public consensus during a tumultuous time in Morocco’s history. “Therefore, not making the right decision would be a disaster,’’ he said.