Tangier - One day after a mine explosion in the western Turkish town of Soma, that left at least 274 dead, protests erupted in Istanbul, Ankara and elsewhere in Turkey. 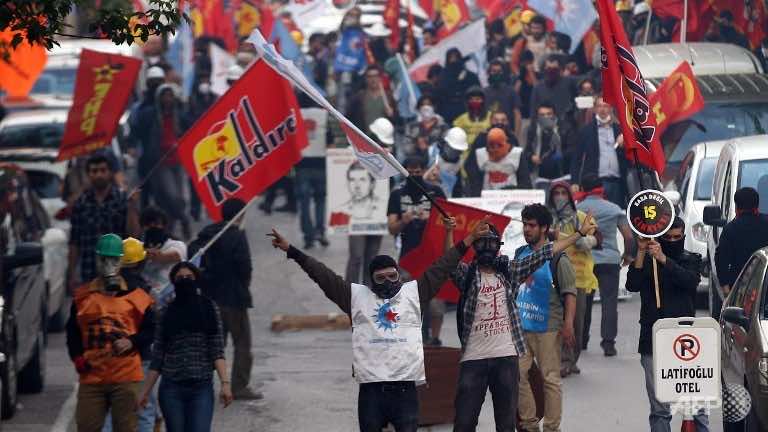 Tangier – One day after a mine explosion in the western Turkish town of Soma, that left at least 274 dead, protests erupted in Istanbul, Ankara and elsewhere in Turkey.

According to CNN, several parts of the country exploded with grief and anger which took the shape of violent protests, one day after the mine disaster that killed at least 274 people.

On Wednesday, Turkish police fired tear gas and water cannons at the protesters who were demonstrating in Ankara’s downtown Kizilay Square.  About 120 workers remained trapped inside the mine.  In Istanbul’s iconic Taksim Square, as well as in the western town of Soma where the explosion triggered the deadly disaster, similar protests were taking place.

The AP reported that police set up fences and kept guard around the Soma state hospital, in order to keep the crowds away from scores of injured miners.

The country’s Prime Minister, Recep Teyyip Erdogan, immediately said that the accident would be “investigated thoroughly,” according to Aljazeera.

However, in Soma, the Prime Minister’s comments did nothing to assuage the heightened emotions of the relatives of the miners.  They publically shouted that Erdogan was a “murderer” and a “thief.”  In Istanbul, the message had a different tone, as approximately 500 protesters shouted, “government resign!”

Following the tragedy, three days of national mourning were declared by Prime Minister Erdogan and he ordered flags to be lowered to half-staff.  Additionally, he postponed a foreign trip in order to visit the mine in Soma.

According to the mining company, at least 450 people have been rescued so far, but authorities state that the rescue is being hindered by the fact that the mine is kilometers long. They company adds that, while the disaster was the result of an explosion and fire that was caused by a power distribution unit, the deaths were caused by electricity problems.

The AP also reported that the mining company’s owner, Soma Komur Isletmeleri A.S., clarified that the accident occurred despite the “highest safety procedures and continuous controls,” adding that, “an investigation was being launched.”

The Ministry of Labour and Social Security said that the mine had been inspected five times since 2012, including one as recent as March, 2014, and no problems violating work safety and security were found or detected.

Mining accidents are common in Turkey’s mining industry, which is said to routinely operate under poor conditions. Until this horrible disaster, a gas explosion, in 1992, wherein 263 workers were killed, had been Turkey’s worst mining disaster.