Marrakech- In her IMF blog, Managing Director of the IMF Christine Lagarde recorded her impressions of her recent visit to Morocco, noting how well the economy has performed in the face of global recession and the aftermath of the Arab Spring. 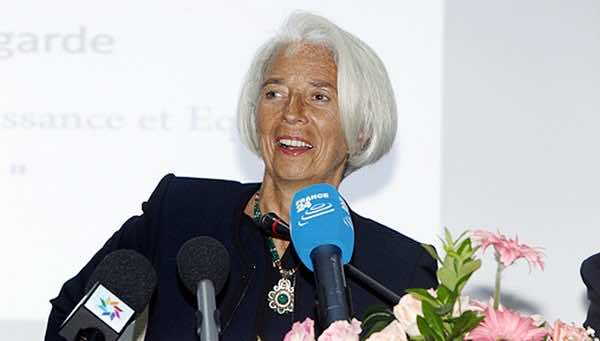 Marrakech- In her IMF blog, Managing Director of the IMF Christine Lagarde recorded her impressions of her recent visit to Morocco, noting how well the economy has performed in the face of global recession and the aftermath of the Arab Spring.

Morocco has remained stable whilst its neighbors have been in turmoil, and further economic reforms in Morocco are on the way.

The head of the IMF noted that the problem of youth unemployment- which in MENA countries stands at 15 million people- in Morocco is at 19%, twice the region’s average rate of 9.2%.

She pointed to the need for solid macroeconomic performance and increased cooperation between the public and private sectors to create jobs and called for an inclusive economy to support growth. In her speech in Rabat, she called for growing the middle class and increasing the number of small and medium enterprises, and for the government to encourage balanced economic growth and entrepreneurship.

She said that the private sector can only succeed if there is an improved business environment, less red tape and freer economy for young entrepreneurs through better financing provisions. As noted by Prime Minister Abdelilah Benkirane, the public sector cannot cater to all graduates at a time when government budgets are being cut.

The Moroccan government is working hard to meet these conditions and remains the best positioned in North Africa for developing the private sector.

Christine Lagarde called for easier entry for young people into the job market, skills-based education, (a requirement also noted in King Mohammed VI’s speech on education) and better functioning labor markets. It is not easy to reform an education system, but this is what has to be done to reduce the number of unemployed graduates.

She said that women account for 66% of college graduates and only 26% were actively employed in the labor market, a ratio which, she pointed out, needed to be improved and could increase considerably Morocco’s GDP.

In addition, she called for a more inclusive economy, as there is a pronounced wealth distribution gap, and said more transparency would reduce corruption, which undermines social cohesion. She called on the Moroccan government to implement structural reforms to improve competitiveness and economic growth and increase the number of jobs. This, as she acknowledges, is not an easy task.