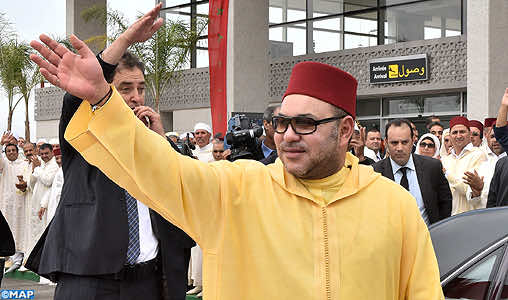 The project, under an agreement signed on April 1, 2008, under the chairmanship of HM the King, is part of actions undertaken by the sovereign for opening up and enhancing access to the Tadla-Azilal region, while ensuring a global, balanced and sustainable development.

Located eight kilometers north-western the city, the new facility mirrors HM the King’s will to provide for Tadla-Azilal an airport that would enable developing international air traffic with European countries to attract more tourists, as well as with those hosting large expatriates’ communities from this Moroccan central region.

This project consists of building a passenger terminal and a control tower, upgrading the runway and its surroundings, fence extension and constructing a road access and a parking for vehicles.

With a capacity of 150,000 passengers yearly, the new terminal (1,500 square meters) has high-tech equipment meeting international standards in terms of security and quality of services, a public hall, a departure area under the customs’ authority with a VIP lounge and an arrival zone.

The building works also included the construction of a new control tower and purchasing modern navigation systems and high-intensity runway lights for guiding aircrafts in flight and night take-off and landing.

The airstrip was extended, reinforced and broadened (2,500 m x 45m) so that it can receive medium-haul aircrafts type B737-800.

The development of the Beni Mellal airport, stretching over a surface area 170 hectares, falls within the framework of the implementation of the strategic plan by the National Office for Airports.