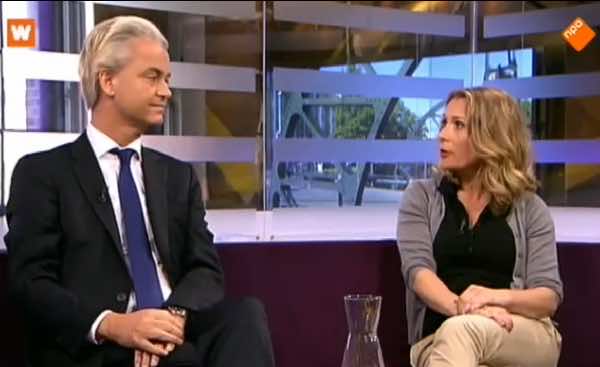 By
Larbi Arbaoui
-
Larbi is a freelance writer and assistant editor at Morocco World News.
May 20, 2014
Spread the love

Following her appearance on the TV show, where she disagreed with Wilders, the Dutch actress claimed to have received several death threats.

According to NLtimes, Van Rijin received a death threat that read, “Dirty leftist whore, you’ll find out. I often see you walk around with that [expletive] head of yours. Soon a knife between your [breasts], dirty breeding machine.”

In a video of the show posted on YouTube, the anti-immigrant politician, Wilders, cited some research claiming that 43 percent of the Dutch people agree with his standpoint on Moroccans in the Netherlands, that “there should be fewer.”

Van Rijn refuted the number given by Wilders saying that this percentage is groundless. “You just throw out some numbers, and honestly they don’t make any sense! I would love to see a research bureau in action addressing those kinds of figures,” the actress said.

The hate speech of Wilders, who is the leader of the Party for Freedom (PVV), against Moroccans living in the Netherlands has caused an outcry in the Netherlands and elsewhere. Following Wilders’ latest comments against Moroccans during an election night rally, Dutch parliamentarian and former tax adviser Roland van Vliet, also a member of the far-right Party for Freedom, resigned from the party.

Virulent, anti-Islam statements by Wilders have angered many all over the world. A Facebook page titled “Ik doe aangifte tegen Wilders” (I am reporting Wilders) has gained popularity, with 98,406 likes since it was launched in March.

According to Reuters, “Saudi Arabia is considering trade sanctions against the Netherlands because of stickers printed by far-right politician Geert Wilders which display anti-Islam slogans in the colors of the Saudi flag.”

In reaction to the possible trade measures announced by Saudi Arabia, Wilders said in a statement that the Netherlands “should have boycotted that country a long time ago,” according to the same source.