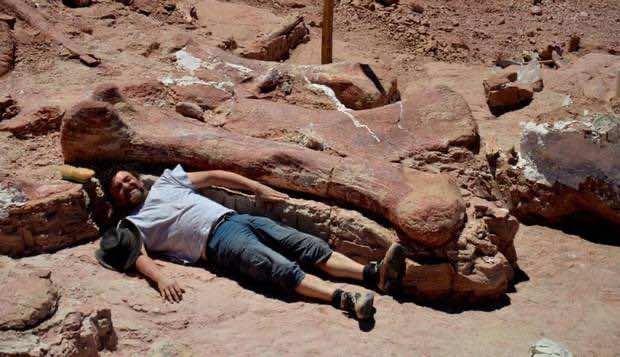 Scientists in Argentina have uncovered the bones of what is believed to be the world’s biggest dinosaur and animal that ever lived on earth.

“Farm worker Aurelio Hernandez first stumbled on the remains in desert land near La Flecha which is around 250 km (135 miles) west of Trelew, Patagonia in Argentina” reported BBC News Science and Environment on May 17, 2014. Upon finding the bones, Mr. Hernandez immediately told the owners of the farm and they contacted Mr. Pablo Puerta, a Paleontologist of Feruglio Museum.

The task of unearthing started about January 2013. Scientists of the Museum Feruglio excavated the ground and found seven partial skeletons amounting about 150 bones in remarkable condition. The scientists were able to determine the size and weight of the creature.

The research was led by Dr. Jose Carballido and Dr. Diego Pol. According to the measurements of its gigantic and thick bones, it would have been 40 m (130 ft.) long and 20 m (65 ft.) tall. Paleontologists think it is a new species of Titanosaur, which was an herbivore (vegetable eater). They believe this species is part of a diverse group of sauropod dinosaurs that were characterized by a long neck and tail and a small head, dating from the Late Cretaceous period.

The mega dinosaur would have weighed 77 tons, which is the equivalent of approximately 14 elephants! This weight makes it even heavier than the previous record holder Argentinosaurus that weight in at 70 tons.

The researchers stated that the creature, which lived in the forest of Patagonia between 95 and 100 million years ago, was yet to be named. “It will be named according to its magnificence and in honor both to the region and to the farm owners of the land where it was found,” the researchers said.