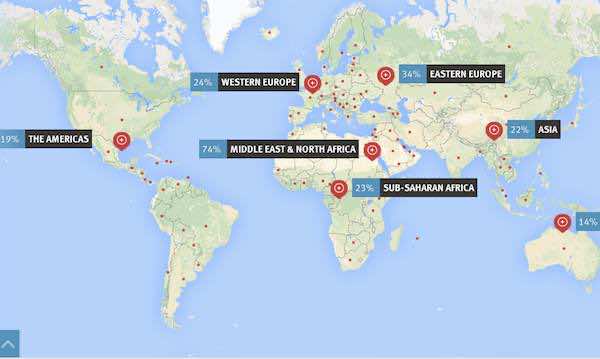 Yet this poll is problematic both in terms of its process and its conclusions, and this is important, because the opinions it expresses seem likely to cause contretemps and fuel the longstanding conflict between Jews and Arabs. Therefore, it is imperative to look more closely at the poll itself to see what it is really pointing to.

The pollsters themselves admit that there are flaws in the methodology. The poll conducted “53,100 total interviews among citizens aged 18 and over, across 101 countries and the Palestinian Territories in the West Bank & Gaza,” a tiny sample in a vast area encompassing many millions of people. Some data was “incomplete.” And in my view there are flaws that go way beyond the flaws acknowledged in the study itself. The poll’s statement of its methodology states that data was “weighted” for demographic measures, such age, gender, religion, urban/rural location, ethnicity, and language spoken, but how is unclear. There appear to be gross leaps of logic between the questions asked and the supposed conclusions gleaned from the answers.

Moreover, there is a gross definitional error. While all the questions posed relate to perceptions of Jews, the poll concludes that people harbor attitudes pertaining to “anti-Semitism.” The poll thus perpetuates a myth and misnomer. Jews and Arabs are both Semitic people. Thus to assert that the highest percentage of anti-Semitic attitudes resides in the MENA region could equally be interpreted as saying that people in the region hold the highest percentage of anti-Arab attitudes. Obviously, that is not what was intended, but it reflects on the credibility of the poll itself.

It is important to remember that this is not a scientific study. Indeed, it is just a poll, a series of questions from which generalities are extrapolated.  Polls are regularly manipulated and interpolated to demonstrate whatever it is one wants them to prove.  The wording of questions, the order in which they are asked, as well as the number or form of the offered alternative answers can dramatically influence the results of polls.

Perhaps the more important question here is what is the purpose of this poll? If the purpose of the study is to demonstrate that there is bias and bigotry against certain groups in the world, namely Jews, there is no doubt about it. Undoubtedly, another poll would find bias against Muslims and against Christians, or against women, or feminists, or gays, or lesbians. We all know these biases are rampant in the world.

It seems a misguided choice to expend capital and energy on proving that these things exist.  In this scholar’s view, we need to focus on educating people about our shared roots and creating unity through programs that bring people together. In the current political climate, this poll seems doomed to create and perpetuate division and misunderstanding amongst people in the world or, worse, to perpetuate the culture of the “victimization” of Jews.

My father’s parents, my Jewish grandfather and my Catholic grandmother were brave pioneers in the important process of finding ways to live together and learning to understand one another. It is essential to look back at recent history, but also we need to look further, and we must use all that we can learn as a foundation to move forward and reclaim the future — a future reflecting a state of affairs that thrived for eight hundred years in history in a place known as al Andalus in Arabic, and ha-Sefarad in Hebrew — an era marked by a peaceful coexistence rooted in pluralism and shaped by religious tolerance.