Washington- Morocco was honored on Wednesday in Washington, during a ceremony held at the headquarters of the US Congress on the occasion of the International Day of United Nations Peacekeepers, in recognition of the important contribution of the Kingdom in the peacekeeping Operations of the United Nations in Africa. 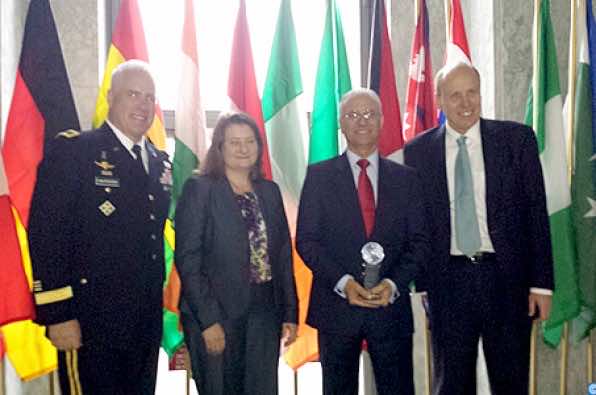 Washington- Morocco was honored on Wednesday in Washington, during a ceremony held at the headquarters of the US Congress on the occasion of the International Day of United Nations Peacekeepers, in recognition of the important contribution of the Kingdom in the peacekeeping Operations of the United Nations in Africa.

The ceremony, organized at the initiative of the “Better World Campaign” organization and the United Nations Foundation (U.S. branch), was marked by the participation of U.S. Congressmen, Deputy Assistant Secretary at the State Department’s Bureau of International Organization Affairs, Victoria K. Holt, as well as Arab and African diplomats, including ambassador of Morocco to the United States, Rashad Bouhlal.

On this occasion, Bouhlal received, on behalf of Morocco, an award in recognition of the contribution of the Kingdom in the United Nations peacekeeping operations.

In a statement, Executive Director of “Better World Campaign,” Peter Yeo, praised the tireless efforts made by Morocco as part of the UN-led peacekeeping operations, particularly in Côte d’Ivoire and Congo, noting that Moroccan soldiers contribute to the preservation of peace and security and the protection of civilian populations in these African countries.
Nearly 1,600 Moroccan peacekeepers are deployed mainly in Congo and Côte d’Ivoire.