Rabat - Morocco's minister of foreign affairs and cooperation, Salaheddine Mezouar, held a meeting this Tuesday with UN High Commissioner for Human Rights, Navi Pillay, currently on a four day official visit to Morocco at the invitation of the Moroccan government. 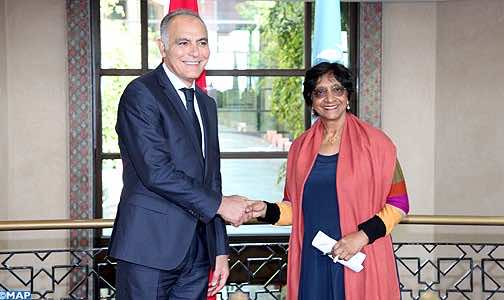 Rabat – Morocco’s minister of foreign affairs and cooperation, Salaheddine Mezouar, held a meeting this Tuesday with UN High Commissioner for Human Rights, Navi Pillay, currently on a four day official visit to Morocco at the invitation of the Moroccan government.

The invitation extended to the UN official comes to confirm the continuous and close partnership uniting Morocco and the UN human rights mechanisms.

It is part of Morocco’s irreversible choice, spurred by King Mohammed VI, to consolidate, protect and promote human rights and defend basic freedoms.

This is Pillay’s first official visit to Morocco since she took office in 2008.

During her stay in Morocco, the UN high commissioner will meet the head of government, the minister of foreign affairs and cooperation, the minister of justice and freedoms and the inter-ministerial delegate for human rights, the source adds.

On her schedule are also work sessions with the speakers of the two parliament’s chambers, he president of the National Human Rights Council (CNDH), the chairman of the economic, social and environment council and representatives of the Moroccan civil society.

Talks will cover the whole set of cooperation aspects between Morocco and the UN body as well as means to reinforce partnership.