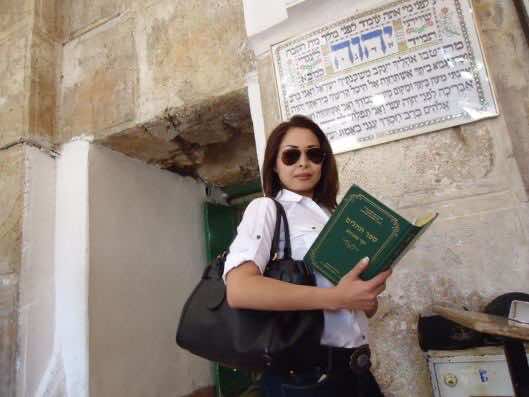 By
youssef sourgo
-
Youssef Sourgo is currently a Master’s student in Linguistic and Literary studies at Ain Chok Faculty of Letters and Humanities.
May 29, 2014
Spread the love

Ghislaine Taibi, who works for a French-speaking private Moroccan channel has been harshly criticized by many Moroccans for a recent visit she paid to Israel. A picture of her holding the Torah while standing adjacent to the Western Wall in the Old City of Jerusalem has set social media ablaze.

The bulk of comments on the picture associate Taibi to the Zionist cause in a derogatory way and attack the private channel 2M. “Pigs go back to their origins,” read one of the comments. “Truth need be revealed about this filth,” read another comment referring to Moroccan channel 2M.

Besides social media, where Taibi’s picture in Israel has called forth mostly negative reactions from Moroccans, a cluster of Moroccan news websites shed light on a different angle of Taibi’s visits to Israel. Some of these news outlets turned to Ghizlane Taibi herself in search for answers.

Moroccan news outlet Febrayer recently interviewed the Moroccan journalist on her highly criticized  visit to Israel which has clearly aroused  many Moroccans. “I’d like to start by saying that this is not the first time I’m harshly attacked for visiting Israel,” Taibi told Febrayer.

Asked on how she reacted to some Moroccans’ negative reactions to her visit to Israel, Taibi answered, “I’ve never considered responding to these trivial and unjustified attacks, carried out by people who don’t even know the real reasons for my visit there, and who ignore the principles of my work as a journalist.”

Taibi explained that her very first motivation for visiting Israel was her job as a journalist, a job that consists of “hunting news regardless of where it is found.” The second reason for her visit to Israel, she further explained, is her intention to write a book about religions, which she intends to announce very soon.

“The reasons for my visits to Israel are only professional and scientific,” she told Febrayer.

“Supporting peace and coexistence between both sides (Palestinians and Israelis) is what matters most,” declared Taibi. “The two sides are yearning for peace, except for those extremists who are fighting against the willingness of their people,” she added.