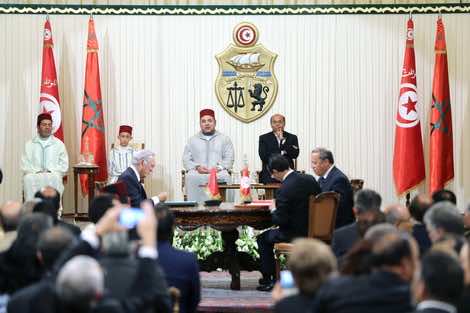 These agreements are of highly strategic importance, as they cover various economic, social and security fields, and open up broad prospects of cooperation for the integration of the Maghreb. They are also marked by a significant openness on new areas of cooperation, including renewable energy, the environment, financial markets, and the promotion of human rights, as well as by the important involvement of the private sector represented by the General Confederation of Moroccan Businesses (CGEM) and the Tunisian Union of Industry, Trade and Handicrafts (UTICA).

The signing of these agreements reflects the will to support the transition that Tunisia is undergoing, and to enrich in a qualitative way the legal framework of bilateral cooperation.

The first agreement covers a Memorandum of Understanding between the Moroccan Academy of Diplomatic Studies and the Tunisian Diplomatic Institute for Training and Education, signed by foreign minister, Salaheddine Mezouar and his Tunisian counterpart El Mounji El Hamidi.

The second agreement concerns an executive program of cultural cooperation for the 2015-2017 period, signed by Mezouar and El Hamidi.

The third agreement relates to cooperation in the field of security, signed by interior Minister, Mohamed Hassad and his Tunisian counterpart, Lotfi Benjeddou.

The fourth agreement, signed by minister of economy and finance, Mohamed Boussaid and his Tunisian counterpart, Hakim Benhammouda, relates to regional integration and co-development.

The eighth agreement, a draft partnership agreement and cooperation between the ministries of education of both countries and the National Council for Human Rights and the Arab Institute for Human Rights, was signed by minister of national education and vocational training, Rachid Belmokhtar and his Tunisian counterpart, Fethi El Jerray.

The ninth agreement, which covers a cooperation protocol in the field of health, was signed by minister of health, Hussein El Ouardi and his Tunisian counterpart, Mohammed Essaleh Benammar.

The tenth framework agreement on cooperation in the field of logistics, was signed by minister of infrastructure, transport and logistics, Aziz Rebbah and Tunisian Minister of transport, Shihab Ben Ahmed.

The 11th agreement is a memorandum of understanding on cooperation between the Higher Institute of Maritime Studies of Casablanca and Tunisia’s Mediterranean Institute for Training in Maritime Professions, signed by Aziz Rebbah and Shihab Ahmed Ben.

The 12th agreement covers cooperation in the field of religious affairs and endowments and was signed by minister of endowments and Islamic affairs, Ahmed Toufiq and his Tunisian counterpart Mounir Tlili.

The 13th agreement is an executive program of cooperation in the field of religion and waqf for the 2014-2017 period, and was signed by Ahmed Toufiq and Mounir Tlili.

The 14th agreement covers an executive program of cooperation in the field of tourism (2014-2017), signed by minister of tourism, Lahcen Haddad and his Tunisian counterpart, Amal Karboul.

The 17th agreement, which covers cooperation in the field of the environment, was signed by minister-delegate for the environment, Hakima Al Haiti and Tunisian secretary of state for sustainable development, Mounir El Mejdoub.

The 18th agreement, which concerns cooperation between CGEM and UTICA, was signed by Meriem Bensaleh Chaqroun, president of CGEM, and Widad Bouchmaoui, president of UTICA.

The 19th agreement on cooperation between the National Railroad Office (ONCF) and the Tunisian National Railway Company was signed by ONCF director general, Mohamed Rabii Lakhlii, and CEO of the Tunisian company, Mokhtar Sadek.

The 20th agreement relating to cooperation between the National Office of Hydrocarbons and Mines (ONHYM) and the Tunisian Oil Activities Company (ETAP), was signed by Amina Benkhadra, ONHYM director-general and Mohamed al Akroute, CEO of ETAP.

The 22nd agreement provides for promoting partnership in the development of solar energy. It was signed by Mustapha Bakkoury, CEO of the Moroccan Agency for Solar Energy (MASEN) and Hamdi Harrouch, director general of the National Agency for Energy Management.