Marrakech -Morocco World News has achieved an outstanding success in publishing news and cultural events of Morocco, an achievement that has been recognized by Google having included Morocco World News on its daily news coverage of on-line articles focusing on Morocco. No other Moroccan online news site has achieved this success. 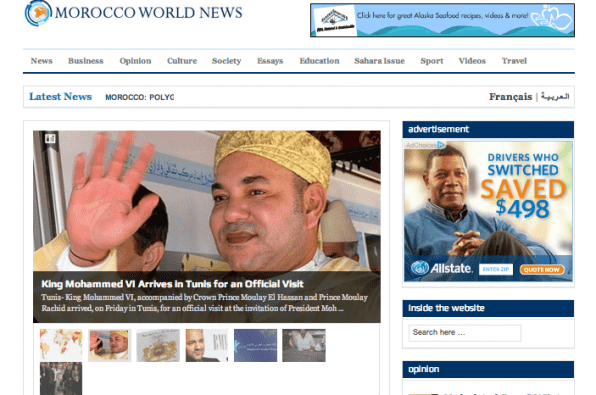 Marrakech –Morocco World News has achieved an outstanding success in publishing news and cultural events of Morocco, an achievement that has been recognized by Google having included Morocco World News on its daily news coverage of on-line articles focusing on Morocco. No other Moroccan online news site has achieved this success.

In a media environment that is heavily censored and dominated by propaganda in both French and Arabic media, both online and in print, Morocco World News is the only consistently open and topical, daily, English-language publication covering Morocco. As a bastion of intellectual freedom, MWN is a breath of fresh air.

MWN gives young Moroccan writers the opportunity to express themselves freely in the English language, and they do so very well. Writing in English is still far too rare in Morocco and having watched the Moroccan media scene since 1990, I can say that Morocco World News is the most significant positive development in Moroccan media during this time. It has given birth to English language journalism in Morocco.

While sometimes articles may be too long or insufficiently concise or while there may simply be too many words on the page, the regular young writers for MWN are very clear in the ideas they express. In fact, Morocco World News has given priority to young writers. The young are the future of Morocco. MWN’s intelligent decision to publish articles on FaceBook, which is the primary communication medium of young Moroccans, has meant that MWN now has more than 80,000 subscribers worldwide.

Two brothers, Samir and Adnane Bennis, introduced MWN in the United States of America during the Arab Spring in 2011. While there have been other online sites based in the U.S., they have not found a large readership. The spirit of the desire for openness, dignity, and free expression lives on in MWN, even though the momentum of the February 2 Movement has expired.

The genesis of MWN was and still is the U.S., and the sub-editing of MWN articles appears to be exclusively by Americans. American standard English is substantially different from English spoken and written in other countries, notably the United Kingdom. MWN would benefit from having access to writers and editors who can use English language from other countries which are different from the United States. One hopes that more Moroccans in Britain, British writers, and writers from other English-speaking countries will also take part more fully in MWN.

While much of the writing by MWN’s regular writers is highly professional, to be sustainable in the long term, there needs to be a professional staff of editors.