Tunis- Tunisian president, Moncef Marzouki, hosted this Saturday at the Presidential palace of Carthage in Tunis, a dinner banquet in honor of King Mohammed who is paying an official visit in Tunisia. 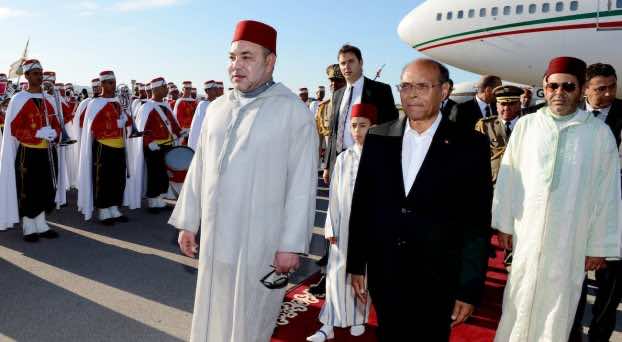 Tunis- Tunisian president, Moncef Marzouki, hosted this Saturday at the Presidential palace of Carthage in Tunis, a dinner banquet in honor of King Mohammed who is paying an official visit in Tunisia.

The King, who is accompanied by Crown Prince Moulay El Hassan and Prince Moulay Rachid, was welcomed at the presidential palace by the Tunisian head of state.
On this occasion, the King awarded to the Tunisian president the “Wissam El Mohammadi” distinction.

On his part, President Marzouki extended to the Sovereign the special Grand Cordon of the Republic distinction.

King Mohammed VI was, then, greeted by representatives of the association of Moroccan students in Mounastir and by Moroccan business operators in Sousse.