Rabat - Morocco flatly denied this Sunday reports by some news outlets over an alleged spat between King Mohammed VI and Tunisian President Moncef Marzouki, says a release of the Royal office according to Maghreb Arab Press. 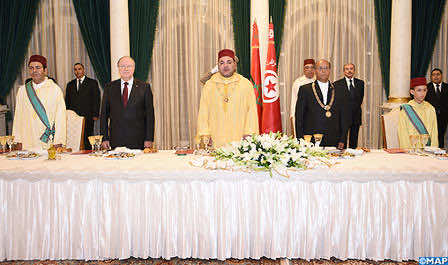 Rabat – Morocco flatly denied this Sunday reports by some news outlets over an alleged spat between King Mohammed VI and Tunisian President Moncef Marzouki, says a release of the Royal office according to Maghreb Arab Press.

“The absurd and unfounded information, reported by some ill-intentioned press, over an alleged divergence between HM King Mohammed VI, may God assist Him, and Tunisian President, His Excellence Moncef Marzouki, is flatly denied by the Kingdom of Morocco,” said a the release.

“The authors of this aberration have voluntarily ignored the Tunisian Republic protocol, which like in many other countries, does not require the presence of the Republic president at the Assembly during this kind of occasion. This aberration has also been formally denied by the Tunisian Presidency. While fully understanding the fact that enemies of rapprochement between peoples and that opponents of Maghreban construction were particularly disturbed by the success of this visit and by the excellence of Morocco-Tunisia relationships, the Kingdom of Morocco can only deplore that these parties reach such baseness,” the release concluded.

On Sunday a number of Tunisian websites spread a rumor that King Mohammed VI cut short his visit to Tunisia and decided to go back to Morocco. The reason of the alleged spat was a disagreement between the two heads of state over the Western Sahara conflict.

A communiqué issued by the Tunisian Presidency on Saturday denied such allegations.

Tunisian President, Moncef Merzouki who studied in Tangier and whose father was a political refugee in Morocco since 1956, hosted a dinner in honor of King Mohammed VI and its accompanying delegation.

On this occasion, the Moroccan monarch King awarded to the Tunisian president the “Wissam El Mohammadi” distinction.

On his part, the Tunisian President extended to Morocco’s King the special Grand Cordon of the Republic distinction.