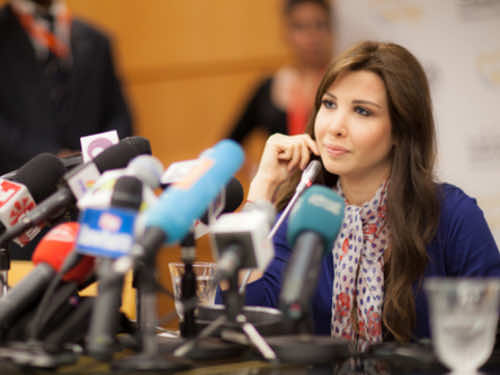 By
youssef sourgo
-
Youssef Sourgo is currently a Master’s student in Linguistic and Literary studies at Ain Chok Faculty of Letters and Humanities.
Jun 2, 2014
Spread the love

According to Moroccan news portal Hesspress, Nancy Ajram, one of the international artists taking part in Mawazine 2014, has been thinking about singing a song in Moroccan Arabic, but no Moroccan artist has yet suggested to her “the one song”.

“Please suggest your projects to me. I really want to sing in Moroccan Arabic,” Nancy requested from Moroccan songwriters, according to the same source.

This is the third time Nancy Ajram has taken part in the Mawazine Festival. The Lebanese diva has never turned down any request to sing in Morocco, and her fan base in the kingdom is one of the largest and rapidly growing in the Arab World. Her participation in Mawazine, as she has stated on many occasions, has been her chance to reunite with one of her most faithful fans.

Nancy Ajram’s first participation in Mawazine was in 2008. Since then, her love has grown for the Moroccan audience, whose reaction to her first appearance on the Moroccan stage has remained etched in her memory.

After the Tunisian Minister of Culture Mehdi Mabrouk banned Nancy, along with other famous Arab singers, from performing in the 2012 edition of the Tunisian Kartaj Festival, the Lebanese star found in Morocco’s Mawazine Festival consoling warmth.

Nancy Ajram’s condition for any Moroccan songwriters with potential projects to suggest to her is that the song be “good music” with “great lyrics,” according to the Moroccan Press Agency (MAP).

Nancy won her first World Music Award in the category of best artist in the Middle East in 2008. Since then, her fame has extended even more to reach other corners of the world, making of her one the most popular singers in the Arab World.