Rabat - Tunisian president, Mohamed Moncef Merzouki, praised the commendable and constant efforts made by King Mohammed VI, Chairman of Al Quds Committee, to preserve the identity of the city of Al Quds. 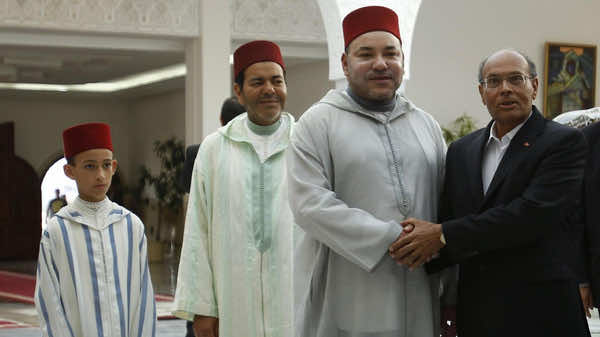 Rabat – Tunisian president, Mohamed Moncef Merzouki, praised the commendable and constant efforts made by King Mohammed VI, Chairman of Al Quds Committee, to preserve the identity of the city of Al Quds.

“His Excellency, Dr. Mohamed Moncef Merzouki has praised the commendable and constant efforts made by His Majesty King Mohammed VI, chairman of Al Quds committee, to preserve the identity of Al Quds, and its Arab-Islamic civilization”, says a joint communiqué released on Sundayon the occasion of the King’s official visit to Tunisia.

The Tunisian head of state also commended King’s efforts to confront attempts to judaize and alter the historic feature of the holy city, thanks to programs and projects supervised by Bayt Mal Al-Qods.

The communiqué points out that the two heads of state have reaffirmed “full support” to the Palestinian people in its struggle to recover its national legitimate rights and establish its independent state with Al Quds as a capital.

The two leaders also called the international community to shoulder its responsibilities and rapidly find a fair, comprehensive and lasting settlement to the issue, in order to guarantee peace and security in the region and gather for the Palestinian people conditions of security, stability and dignity.

They also applauded the inter-Palestinian national reconciliation agreement, signed by the Fatah and Hamas movements on April 23, 2014, and hoped that this agreement will contribute to consolidating the Palestinian ranks union and will serve its fair cause.

On the situation in Syria, King Mohammed VI and the Tunisian President voiced total solidarity with the Syrian people to fulfill its legitimate aspirations to freedom, dignity and democracy.

In this context, they underlined the need to secure the shipping of humanitarian help to those in need and reiterated support to ongoing efforts to put an end to the bloodshed in this brother country and reach a political settlement to the Syrian crisis, guaranteeing the respect of the integrity of Syria’s territory and the unity of its people.