Casablanca - Moroccans were introduced on Friday, May 23, at the Hassania School of Public Works (EHTP) in Casablanca, to the new 20 distinguished Moroccan leaders who would carry the torch and lead the way to multidimensional development in Morocco. 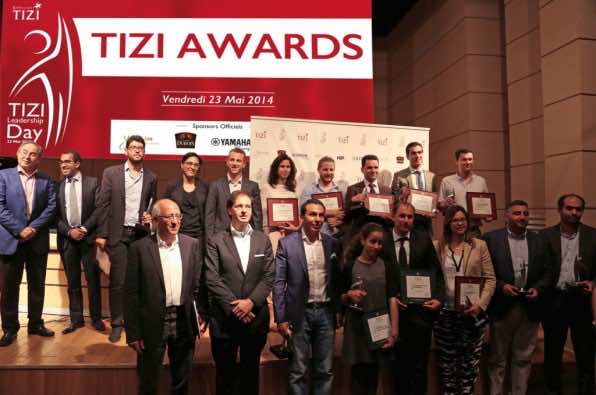 By
youssef sourgo
-
Youssef Sourgo is currently a Master’s student in Linguistic and Literary studies at Ain Chok Faculty of Letters and Humanities.
Jun 3, 2014
Spread the love

Casablanca – Moroccans were introduced on Friday, May 23, at the Hassania School of Public Works (EHTP) in Casablanca, to the new 20 distinguished Moroccan leaders who would carry the torch and lead the way to multidimensional development in Morocco.

Organized by the Tariq Ibn Ziyad Initiative (TIZI), the second edition of the TIZI AWARDS celebrated the new 20 young Moroccan talents, who will later receive training on leadership at the prestigious Harvard University, in the Maerican state of Massachusetts.

The event was opened by former Minister of Commerce, Industry and ICT, Mr. Ahmed Reda Chami, who highlighted the challenges of leadership for an emerging country like Morocco.

The event also featured a roundtable that brought together many celebrities around the theme, “Moroccan leaders, where are they? Who are they? What do they do?” The fields of leadership addressed during the round table were sports, social action, arts, business and politics.

Prominent Moroccan personalities took part in the event: Mr. Majid Kaisser El Ghaib, Former High Commissioner of the State and a community actor; Hakim El Marrakchi, CEO of the Maghreb Industry and an active member of the CGEM; Aziz Daouda, an important Moroccan sports personality, and Sahbi Chtioui, famous Tunisian sculptor who has been living in Morocco for several decades.

A dazzling piano performance by the virtuoso Moroccan pianist Marwan Benabdellah kicked off the TIZI AWARDS ceremony, in which Morocco’s new distinguished leaders were revealed and celebrated for their remarkable achievements in several fields.

Below are brief presentations of each of the 20 distinguished TIZI awardees:

Based in New York, Bennis Samir, 37, is a political advisor at an Arab diplomatic mission to the United Nations. Along with his brother Adnane, he co-founded Morocco World News, a digital news outlet, first of its kind, which aims to improve Morocco’s image abroad and defend the strategic interests of Morocco at the head of which is the question of territorial integrity.

Soukayna BENJELLOUN, 26, is an architect and planner living in Tangier. She aims, through her work, to democratize the marketing of cities by first democratizing artistic taste and access to architectural studies in Morocco.

Ghali Bensouda, 22, is a blogger and political activist. He is the President of Cap Démocratie Maroc. Bensouda has supported many causes through his writings: Release of political prisoners, support of journalists, Advanced Democratization in Morocco.

Fatim -Zahra Biaz, 32, is the founder of the New York Lab. She decided to devote herself to the development of entrepreneurship and the digital realm in Casablanca. She has suggested a model for promoting Moroccan entrepreneurship, which would enable it to meet the challenges our society.

Chaqor Youssef, 37, is an engineer from the Mohammedia School of Engineers. He created the first enterprise specialized in the collection and recycling of used cooking oil in Morocco.

Fatima Zohra OUKACHA, 33, is the founder of the company TransWorld Protection and Co -founder & President of CEED Morocco, which has helped more than 70 entrepreneurs in the creation and development of their businesses.

Tarik Fadli, 33, has worked on the development of a solution to paperless signing in Morocco, the certification of copies and the installation of civic IT solutions for the sustainable development of a quality public service for Moroccans.

Abdellah Turabi, 38, holds a graduate degree in Political Science. He was the managing editor ofZamane magazine, and is now director of the weekly magazine Tel Quel.

LAZIRI Maha, 24, is the president and co-founder of Teach4Morocco, an organization that works to expand access to primary education in remote areas of the country.

MAMDOUH Ayoub, 30, graduated from the Ecole des Mines de Paris. After 5 years in an American multinational, he currently works as a consultant in a large strategic consulting firm. He has been actively participating in several projects targeting the Moroccan civil society, including a project launched by the governor of Casablanca aimed at the improvement of the living conditions in Morocco’s economic capital.

OULMIDI Anas, 24, is an internal physician and the President of the association “Lueur d’espoir,” represented in 10 Moroccan cities (Casablanca, Oujda, Fez, Agadir, Safi, Beni-Mellal, Kalaa, Zagora and Paris). Anas is also the Secretary General of the addiction treatment center in Marrakech.

Omar Saghi, 33, graduated from the Institut d’Eudes Politique of Paris. He holds a Ph.D. in political science, and is also a writer, and a scenarist. He is also a member of the Circle of policy analysis at the Abderrahim Bouabid Foundation, and a columnist in some major Moroccan magazines, such asLe Soir-echos and Telquel.

MOULINE Nabil, 33, holds an MA and a Ph.D. in Political Science from Sciences Po Paris. He is responsible for research at CNRS-EHESS and a member of several research teams in Morocco, the Arab world, Europe and the USA.

BENABDALLAH Marwan, 31, is a virtuoso pianist who was present in Morocco during several events, and has also performed on the day devoted to Morocco in the World Expo in Shanghai. He also performed in the closing ceremony of the World Economic Forum, held in Marrakech in 2010. Benabdallah Marwan has become the main representative of Morocco on the international concert scene.

BENALI Abdelkader, 38, is Moroccan-Dutch writer and essayist, originally from Beni Chiker. He wrote eight novels translated into several languages, and now lives in Amsterdam, where he worked on the production of a documentary on women in the Rif.

Nacer IBN abdeljalil, 34 years, carried the Moroccan flag on the world’s highest mountain summit, that of Mount Everest, and he intends to wave it soon in the two polar opposites of Earth (the north and south). Today, Nacer is involved in various social activities for people from underserved areas.

Amine ZARIAT, 24, is former basketball player in the national team. He has created TIBU Association, organized the fourth edition of the Grand International Basketball Tournament and founded the first Basketball Academy in Morocco.

To these 20 distinguished Moroccan leaders were offered a package of encouraging awards: (1) a trophy at the 2014 TIZI Awards ceremony in testimony to their remarkable achievements; (2) media coverage of their projects by TIZI’s media partners; (3) a 20-hour introductory seminar on personal leadership and political leadership; (4) the provision of a mentor to support the forging and strengthening of their professional career; and (5) a scholarship comprising a training on executive leadership policy at the prestigious Harvard Kennedy School—a grant funded by a Moroccan institution.