Casablanca- King Mohammed VI’s informal walk down the streets of Tunis (Tunisia) has made the headlines of many Tunisian and Arab news outlets. Reactions to the sovereign’s initiative have echoed people’s appreciation and enthusiasm. 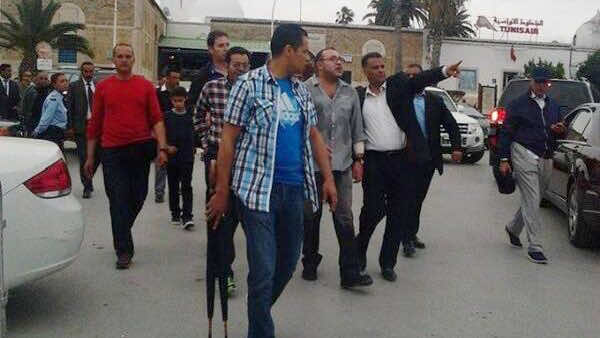 By
youssef sourgo
-
Youssef Sourgo is currently a Master’s student in Linguistic and Literary studies at Ain Chok Faculty of Letters and Humanities.
Jun 5, 2014
Spread the love

Casablanca- King Mohammed VI’s informal walk down the streets of Tunis (Tunisia) has made the headlines of many Tunisian and Arab news outlets. Reactions to the sovereign’s initiative have echoed people’s appreciation and enthusiasm.

Moroccan private channel 2M recently broadcast a report highlighting both Tunisians and Moroccans’ reactions to the sovereign’s casual walk down the Habib Bourguiba Avenue in Tunis.

Particularly for the Tunisian people, the Moroccan monarch’s initiative is emblematic of a positive change both in Tunisia and in Moroccan-Tunisian relations.

For some Tunisians, the King’s initiative affirms the security that Tunisian streets now enjoy. “The fact that the [Moroccan sovereign] walked around without any formalities on a Tunisian avenue shows that Tunisia is a safe country,” a Tunisian young woman told 2M.

Other Tunisians saw in the king’s initiative a live testament to the good relations between Morocco and Tunisia. “We were very delighted to see your king walking down the avenue without ceremony,” another Tunisian citizen told 2M. “This only shows that relations between our countries are at their best. We welcome our Moroccan brothers anytime,” she added.

“Humble” is a word that Tunisian citizens frequently used to describe the king’s initiative. “To see the Moroccan sovereign informally walking down Habib Bourguiba Avenue only shows how humble a leader he is,” a middle-aged Tunisian man told 2M.

“This initiative is unprecedented. It would have taken 5000 police officers for a Tunisian minister’s visit to do the same,” a Tunisian newspaper vendor told 2M in an appreciative tone.

Moroccans residing in Tunisia also expressed their appreciation of the king’s unprecedented initiative in Tunis. “We were very delighted to see our king walking down the avenue without the customary formalities of official visits. It only affirms that Tunisian streets have now recovered their security,” said a Moroccan national residing in Tunis.

For their part, Tunisian journalists saw in the king’s initiative a symbol of stability and progress in post-revolution Tunisia. More particularly, the king’s initiative is also expected to have a positive impact on Tunisian tourism. “The king’s informal visit to some Tunisian streets, which has now gone widely viral on several networks and news sources, is the biggest support to tourism in Tunisia,” a Tunisian editor in chief told 2M.