By Melissa Smyth and Jessica Rohan 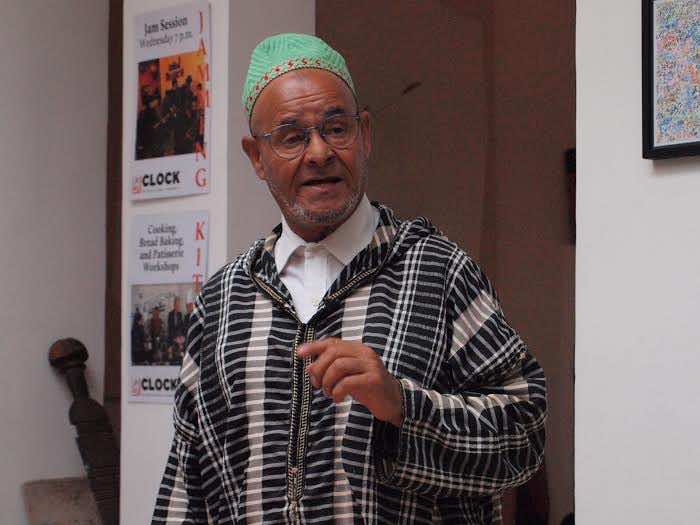 By Melissa Smyth and Jessica Rohan

Marrakech- Cafe Clock’s new location in Marrakech has begun a new program that brings a master storyteller to teach apprentices who tell stories in English, adding to their lineup of cultural events at the restaurant.

Created by Mike Richardson, Cafe Clock opened its second location in February 2014 after the success of the original restaurant in Fez. Designed as a “cross-cultural cafe,” it serves Moroccan/Arab/Western fusion dishes, including the world-famous camel burger, and hosts weekly cultural events such as music and yoga, in addition to the newest storytelling program.

The weekly storytelling performances, which take place on Thursday evenings, feature stories told in Darija and English. The young apprentices tell stories in English, which they have personally translated from the Darija stories that they heard earlier in the week from the master storyteller. Their performances are followed by a story from the master himself, known as Hajj, in Darija.

Hajj, who has been telling stories for over 50 years, knows most of his stories by heart, and can continue a single story in weekly installments for an entire year. He began storytelling in 1959, dismayed at the lack of enthusiasm he noticed in the storytellers in Rabat. He took it upon himself to read hundreds of stories, from sources such as A Thousand and One Nights, and began performing them in public squares from Fez to Marrakech.

In an age when few people could read, storytellers were vital vessels of imagination and information. One of the Cafe Clock apprentices, Mehdi, recalled his childhood trips to Jemaa el-Fna to find a storyteller to listen to each evening. Over his decades of experience in the square as a native of Marrakech, Hajj has seen audiences and the storytelling community dwindle. The noise of motorized vehicles overpowers even the most expressive speakers, and the ever-growing number of juice stands take up valuable halka (story circle) space and push the storytellers to the edges of the square. Increased access to books, television, movies, and the internet have contributed to the declining interest in traditional storytelling. With most storytellers now elderly and no one to replace them, many fear the craft will be lost forever.

In spite of its tenuous position in Moroccan society, storytelling remains an important part of the country’s cultural heritage. Stories range from fables and morality tales to biographies and accounts of important figures and events in Moroccan history. Many traditional storytellers were capable of reciting lengthy histories over the course of years, the equivalent of an oral textbook. The pioneers at Cafe Clock have seemingly recognized the value of this tradition just in the nick of time.

While a cafe setting differs greatly from the lively public squares in which the Hajj had performed for decades, it offers an innovative way to transmit the tradition to a new generation. “If I die, the stories will die,” explained Hajj. Now, however, he shares his stories, in addition to his performance techniques, with energetic young apprentices who practice the art in a new form.

Sara, an apprentice, says that the stories have taught her more about Moroccan culture. Before performing her translations of Hajj’s stories to the Cafe Clock audience, she recites them to her parents at home in Darija. Mehdi adds that he thinks storytelling is valuable not only for his own cultural heritage, but also for the image that visitors receive of Morocco. He considers it a way to counter the stereotypes that many Americans and Europeans hold about Morocco and the Arab region in general.

Cafe Clock is billed as a place where people can come together to share their cultures and creative talents. Indeed, it is a favorite of expats and tourists, but also enjoys steady patronage by local Moroccans. The regular events encourage this intercultural exchange by making it easy for anyone to perform. On Thursday, an American intern who had just arrived in Marrakech performed a piece of Arabic poetry during an intermission between stories. While exposure to American cultural products is common in Morocco, Cafe Clock fosters a unique form of mutual exchange.

The spectators are a mix of foreigners and Moroccans. “Last week we had an Egyptian group come in, and after the stories were finished they sang and danced for us,” says Melissa Topacio Long, coordinator of the storytelling program. A group of five or so Moroccans have become regulars at the storytelling event, and they and the storytellers have befriended the frequent foreign students and visitors. At one point during her story, Sarah paused to greet an English-speaking friend who had just entered. “She’s very popular,” a patron joked.

The program is new, but the apprentices already feel at home in the Cafe Clock community. They are excited to develop their skills and uphold the tradition they have come to appreciate more now as storytellers themselves. The inventiveness of the apprentices’ translations and the vitality of the cultural exchange are sure to attract new members of this growing community, a welcome respite from the bustle of Jemaa el-Fna. The storytelling initiative at Cafe Clock is a promising new approach to balancing Morocco’s cultural heritage with the changing realities of the tourist economy in Marrakech.