Taroudant, Morocco- The Moroccan American Network announced that it will hold a ceremony to honor a number of U.S.-based Moroccan journalists on June 20th-21st in Washington D.C. 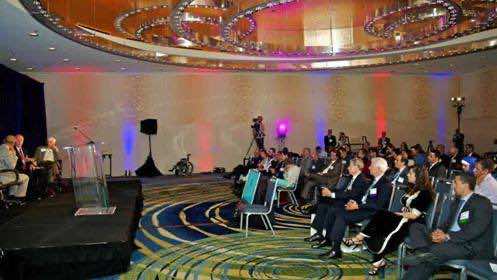 By
Larbi Arbaoui
-
Larbi is a freelance writer and assistant editor at Morocco World News.
Jun 8, 2014
Spread the love

Taroudant, Morocco- The Moroccan American Network announced that it will hold a ceremony to honor a number of U.S.-based Moroccan journalists on June 20th-21st in Washington D.C.

The event recognizes “Moroccan journalists’ selfless service. They are actively working in the American and prestigious foreign media outlets, where they demonstrated their merits and competencies in the big field of media, Mohammed Hajjam, President of Moroccan American Network, told MWN. “

“Honoring these journalists is a recognition of the venerable and prestigious roles they do for their country, for their willingness to promote Morocco abroad, for the defense of their national cause, and for the expertise, experience and big talent they have accumulated in this country, which they do not hesitate to share with their colleagues in Morocco, whenever time allows it,” he noted

Speaking to MWN by phone, El Hajjam said that “a number of Moroccan-American journalists, who have made their names in many foreign channels have accumulated international experience that is very useful to share with their colleagues in Morocco,” calling on those responsible for the media sector in Morocco to “communicate more with Moroccan journalists in the United States, especially in New York and Washington, as the most important decision-making centers of the world.”

He added that “the gathering will be an opportunity to honor Moroccan Americans who work in the field of journalism, as well as bloggers, academics, producers, filmmakers, web developers, cameramen, editors, etc.”

El Hajjam stressed the need to set up a Moroccan media institution in Washington  and New York, which would enable the journalists to do their job better and defend the national cause, and hopess that the Ministry of Communication will honor these talented Moroccan-American journalists.

According to their Facebook page, The Moroccan American Network is “a non-profit organization dedicated to strengthening economic ties between Morocco and the United States.”