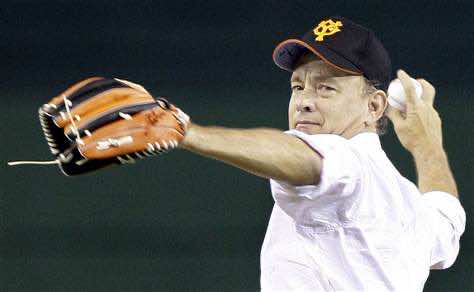 By
Larbi Arbaoui
-
Larbi is a freelance writer and assistant editor at Morocco World News.
Jun 9, 2014
Spread the love

American film star Thomas Jeffrey Hanks, known popularly as Tom Hanks, taught a handful of Moroccan boys how to play the national American game of baseball after “a production truck accidentally ran over their soccer ball and exploded it.”

Half of dozen Moroccan boys were playing football (soccer) in the street in which the American actor was filming his upcoming film, A Hologram for the King, when one of the crew’s production trucks accidentally ran over the soccer ball.

Touched by the sad look on the faces of the boys, Hanks, who happened to be nearby and heard the explosion of the ball, sent his assistant to buy six new soccer balls and gave them to the boys as an apology for the loss of their ball.

According to Showbizspy, the American actor “handed each boy a new ball,” and then asked them, “Hey, do you guys ever play baseball?”

When the boys answered that they did not know how, Hanks is reported to have said, “You show up here tomorrow.  I’m gonna teach you how to play a real sport!”

The six Moroccan boys showed up the next morning on time to find that Hanks had bought bats, balls, and gloves for every one of them, and then he spent an hour teaching them to play the great American sport.